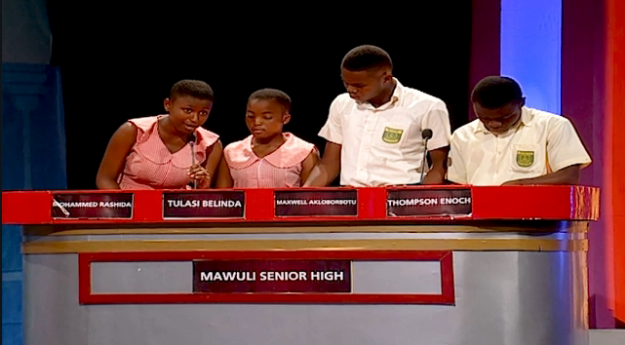 It was third time lucky for the Volta Giants, Mawuli School in The Sharks all-round junior and senior high academic competition as they outlasted fans’ favorite Saint Thomas Aquinas to make it to the finals of the innovative quiz show.

Saint Thomas Aquinas had showed great promise in the previous two contests edging out Saint Peters Senior High and trouncing Adisadel College at the one sixteenth and quarterfinal stages respectively. Many thought it was a done deal as they faced the steady Mawuli side.

This was not to be however, as Team Haviwo led throughout the four-round contest, establishing a convincing lead from the Right Corner Round (Social Literacy) to the R cubed round (Reading, Writing, and Arithmetic), the STEM round and finally the One-on-One round. Mawuli in their previous two attempts at the competition lost at the quarterfinals stage. Their perfect Arts and Science combination this year made sure they beat Pope John Senior High and Okuapemann School en route to the semifinals. The final scores were 95 to 42.5 points in favor of the “Haviwo” side.

Catch all the action below

At the junior level, defending champions Ghana Christian International High were superior against newcomers Burma Camp JHS. The team showed poise and exhibited brilliance throughout the four round contest.  130 – 30 it ended in favor of Christian High. Will they be able to successfully defend the trophy?

Catch all the action below

The excitement still continues in The Sharks Academic Competition. Next week, two top schools Presbyterian Boys, Legon and Keta Senior High will battle in the second semifinal contest for a spot in the finals. At the junior level, former finalist DPS International faces off Kumasi-based Manna International School in a repeat of the finals. The contests show on TV3 (DSTV 279) every Saturday from 2.30pm and streams live on The Sharks Quiz Facebook and Youtube pages.

Pandemic Hit You Hard Financially? Here’s What You Can Do