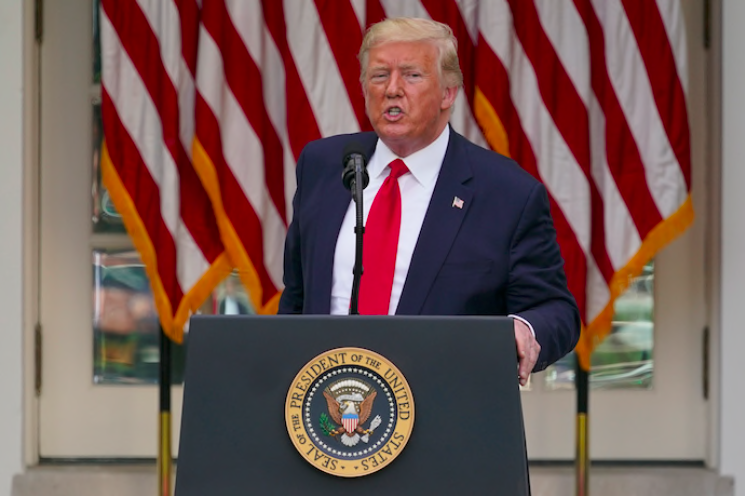 President Donald Trump answers questions from reporters in the Rose Garden on May 26, 2020, in Washington. (Evan Vucci/AP)

US President, Donald Trump on Thursday signed an executive order that could open the door for the U.S. government to assume oversight of political speech on the Internet, a broadside against Silicon Valley many critics view as a threat to free speech
The new directive seeks to change a federal law that generally spared tech companies from being sued or held liable for most posts, photos and videos shared by users on their sites. Tech giants herald these protections, known as Section 230, as the bedrock of the internet. But Trump repeatedly has argued they allow Facebook, Google and Twitter to censor conservatives with impunity—charges these companies deny.

“We’re here today to defend free speech from one of the greatest dangers,” Trump said before signing the document.

Jon Epstein is a partner/shareholder at the national law firm Hall Estill who has worked in media law for almost three decades representing national, regional, and local media entities (including network television stations and national newspapers). He also regularly advises clients on protections and risks related to social media.

“When the internet was in its infancy, Congress passed section 230 of the Communications Decency Act in 1996 in which it made the policy decision that the internet platforms would not be treated as publishers of information that is posted by their users.  That decision was made in order to encourage the free exchange of ideas because if the platforms risked exposure to liability for what others posted, they would limit the free flow of robust debate,” Epstein says.

“During his campaign and since he was elected, President Trump has engaged in a heated conflict with reporters and media platforms who have criticized or questioned him. This is not the first time that this President has considered issuing an executive order designed to remove the protections that were given to social media platforms by Congress in section 230.  Until today, he has refrained from doing so,” Epstein says.

“The issue returned after Twitter fact checked the President’s recent tweet.  This angered him and his supporters because they view certain platforms as adversaries that promote criticisms of the President and his agenda.  Others view those same platforms as tools that allow the exchanges of information that serve as a watchdog on the government and elected officials.  The current dispute appears to be based on whether the actions of these platforms in addressing posts by the President or others is done in good faith,” Epstein says.

“While there may be legitimate reasons to revisit the protections Congress enacted in 1996, should that important issue be debated and decided in Congress or should it be erased by the President during a political beef with his critics?” Epstein says.

“This may be the issue that brings to a head the dispute between the President and the media that he has so often belittled,” Epstein says.