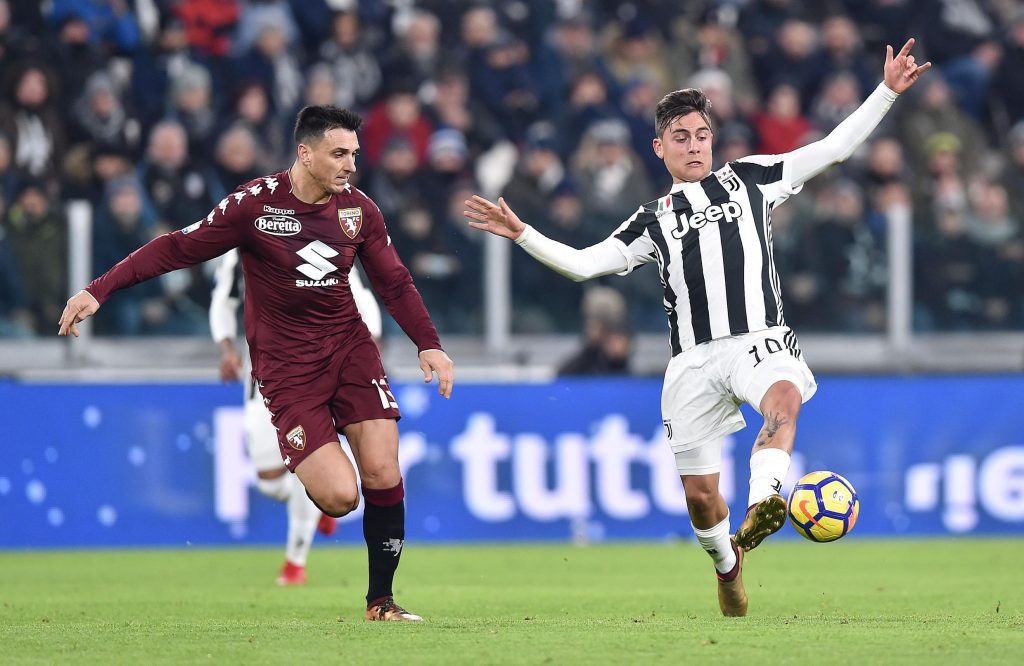 Juventus’ Paulo Dybala (R) and Torino’s Nicolas Burdisso in action during the Italy Cup quarter-final soccer match Juventus FC vs Torino FC at Allianz Stadium in Turin, Italy, 03 January 2018. EPA/ALESSANDRO DI MARCO[/caption] The ‘Derby della Mole’ (the Turin derby) between Torino and Juventus is the pick of round 16 in the 2018/19 Serie A, with most of Italy hoping the ‘Old Lady’ will be stopped in their tracks in what should be a fearsome derby.   Make sure to take your front row seat to the best football action in Italy with the match aired on DStv & GOtv.   The match at Stadio Olimpico Grande Torino on Saturday night is the latest instalment of a rivalry which dates back over a century, but it is very much the ‘here and now’ which concerns the two teams.   Juventus will be looking to maintain, if not extend, their eight-point advantage at the top of Serie A and continue a remarkable run which has seen them claim 43 points from a possible 45 this term. They beat potential title rivals Internazionale at home this past weekend, but a cross-town trip to face ‘Il Toro’ is another challenge entirely, and manager Massimiliano Allegri will be urging his team to maintain their high standards.   As for Walter Mazzarri’s side, they come into the game on the back of a goalless draw away to Milan and will hope African defenders Nicolas N’Koulou, Koffi Djidji and Ola Aina once again help them keep a clean sheet.   If Juve do drop points in the derby, Napoli will hope to close the gap with their match away to Cagliari on Sunday evening though their mental state may depend on how they fared in a crunch UEFA Champions League clash away to Liverpool this midweek.   The Milan sides Internazionale and AC will also hope to make up ground and you can catch their matches, aired live on DStv. Inter feature in the opening game of the round as they host Udinese on Saturday afternoon (in a match likely to feature African stars such as Keita Balde, Seko Fofana and William Troost-Ekong), while the latter are away to Bologna next Tuesday night in a clash which wraps up the round.   Other African stars hoping to make headlines in this round of Serie A matches includes Gervinho for Parma in their trip to Sampdoria, Khouma Babacar and Alfred Duncan (who both scored this past weekend) for Sassuolo at Frosinone, Christian Kouame for Genoa in their trip to Roma and Musa Barrow for Atalanta when they host Lazio on Monday.   Key match stats   Torino v Juventus – Head-to-head, all competitions Matches played 30 Torino wins 3 Juve wins 21 Draws 6   Roma v Genoa – Head-to-head, all competitions Matches played 26 Roma wins 17 Genoa wins 7 Draws 2   Atalanta v Lazio – Head-to-head, all competitions Matches played 39 Atalanta wins 9 Lazio wins 20 Draws 10   Serie A fixtures, 15-18 December All times GMT   Saturday 15 December 5:00pm Internazionale v Udinese – LIVEon SS8/SS10, Max360 & SelGO2/SelGO5 7:30pm Torino v Juventus – LIVEon SS8, Max2 & SelGO5   Sunday 16 December 1:30am SPAL v Chievo – LIVEon SS8 & SelGO5 2:00pm Fiorentina v Empoli – LIVEon SS8 & SelGO5 2:00pm Frosinone v Sassuolo 2:00pm Sampdoria v Parma – LIVEon SS11 5:00pm Cagliari v Napoli – LIVEon SS8 & SelGO5 7:30pm Roma v Genoa – LIVEon SS8, Max360 & SelGO5   Monday 17 December 7:30pm Atalanta v Lazio – LIVEon SS8 & SelGO5   Tuesday 18 December 7:30pm Bologna v Milan – LIVEon SS8 & SelGO5  ]]>

Related Topics:gotv max
Up Next