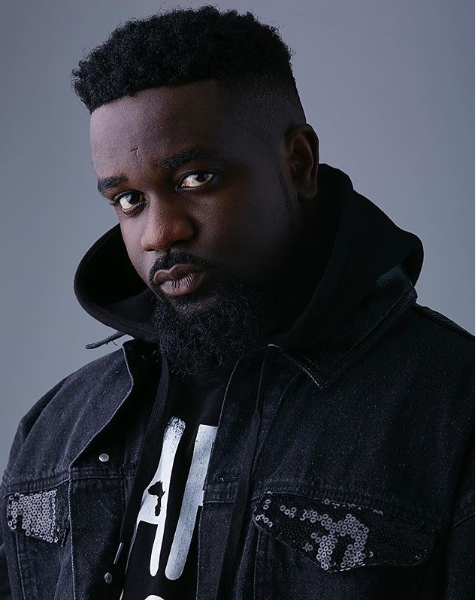 Member of musical group “Praye” Praye Tietia has opined that rapper, Sarkodie should be crowned “Artist of the year” at the upcoming Vodafone Ghana Music Awards.

Stating all the achievements of the B.E.T award-winning rapper in the year under consideration,  Praye Tietia believes Sarkodie stands tall among the other nominees in the list.

“I think everyone here deserves a win because they all worked very hard the year under review but in my opinion Sarkodie did the most last year. An alpha Ep, and an album all in one year, a BET HIP HOP AWARDS, 6 big tunes, Saara, ofeetso, a year of return, Do you, who the man, regular, etc, three of which is currently still on the charts, a ground breaking ” This is Tema” music festival and a super SOLD OUT rapperholic concert to close down the year. I think its only fair that he gets the “artist of the year” again not because he’s Sarkodie but the boy worked just too hard last year mehhnn,” he commented in a post on Instagram.

Sarkodie has been nominated alongside Kuami Eugene, Medikal, Diana Hamilton and Kofi Kinaata in the artist of the year category at #VGMA21. 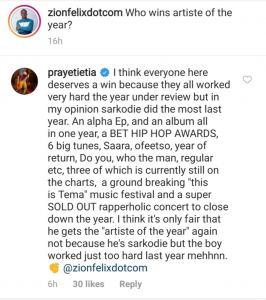 Talk to someone if you’re depressed- MzVee

Watch: AKA falls flat to the ground after failed crowd surf attempt

Ghanaian singer KiDi says his new EP is on the way! END_OF_DOCUMENT_TOKEN_TO_BE_REPLACED

The media outfit which has since August 2021 gone live with carefully curated music playlists targeting Gen Z and millennials is set to officially launch somewhere in September 2022. END_OF_DOCUMENT_TOKEN_TO_BE_REPLACED

Renowned Ghanaian furniture producing company, Kings’ Furniture has been awarded for its hard work and perseverance in the Ghanaian business terrain. END_OF_DOCUMENT_TOKEN_TO_BE_REPLACED

The woman who led the “Me nsa aka ooo” TV commercial 13 years ago to promote MTN’s Mobile Money (MoMo) has been gifted a 2-bedroom house. END_OF_DOCUMENT_TOKEN_TO_BE_REPLACED

It’s difficult to predict where Stonebwoy will be in the coming days, weeks, months, or years. As a musician with a keen interest in pushing his sound to the world and etching his name in the minds of new fans, 2022 has been described as his busiest music year thus far since gaining mainstream recognition in 2012 with Pull Up—seven years after he made his official debut—the musician confirmed this via social media after his last summer show. END_OF_DOCUMENT_TOKEN_TO_BE_REPLACED