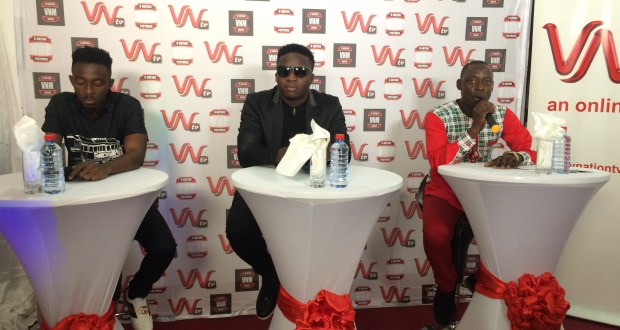 One of Africa’s entertainment mogul VNation located in Accra Ghana has officially unveiled it’s first artist  “Leki” signed onto its record label for 8 years. This contract include Distribution, Production and Marketing. As any professional demand, VNation will make provision for a fresher course outside the country for his upgrade. The unveiling which took place on the Friday the 27th of October 2017 at the premises of VNation in Ghana was attended by media personnel, social media influencers and management of the company. The artist Ernest Augustine Effiong known as “Leki” is a 24 year old Afro fusion singer from Nigeria. Leki is a graduate from the sikim manipal university in Ghana who studied journalism and mass communication. Speaking at the unveiling the CEO of VNation Mr. Vincent Tobi said his outfit decided to sign “Leki” as it’s first artist in the year 2017 based on the potentials his seen in him, according to him VNation will make it a priority to fulfill it’s part of the contract. He disclosed that within the 8years. VNation will work together with Leki to produce 8 Albums and 20 musical videos among others. On his part the 24 years old newly signed artist leki said he is totally confident in the capabilities of V Nation to take him to international stages within the contract duration. He said ” As a young artist, before I met the CEO of VNation, I performed on lots of shows for free while  searching for someone to sponsor me” he added In an interaction with kelvinfnk , leki said his inspiration for music is birthed from God, Nature and happenings. He said “I’m a fan of versatility, I like to try everything, I like jazz music aswell, I would love to work with Tuface, Nice, Timaya and burna boy. He urge the general public to expect something great from him as he is ready to inspire many with his music. The manager of VNation Mr. Kelvin Asante briefed media present about the activities of VNation, among other things he disclosed that the company will officially be launching the VNation Studio for it’s full Operation. The launch comes off on the 25th of November 2018 at the premises in Accra Ghana. Leki gave a live performance of his track to entertain those who attended the unveiling.]]>

Bola Ray intervenes to prevent newscaster from leaving Gh One TV to TV3?

Video: This was how Efya won the #JollofWar for Ghana in Nigeria