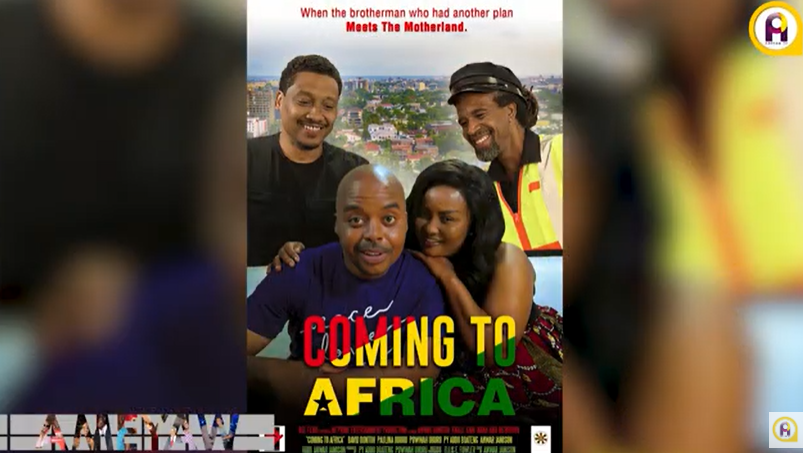 Coming To Africa, a film written and directed by Anwar Jamison is set to be premiered in Ghana.

The award-winning movie which features American actor Khalil Kain, Ghana’s Nana Ama Mcbrown, David Dontoh, PY Addo Boateng and others, will be screening on Friday, December 4, at the Movenpick Ambassadors Hotel in Accra.

The strictly by invitation event commences with a ‘black carpet’ session at exactly 6 pm followed by the premiere which starts at 7 pm.

Coming To Africa previously held a virtual premiere at the San Fransisco Black Film Festival and was shown on the big screen at The Las Vegas Black Film Festival. the film was nominated for six awards and won three:  Best Comedy, Best Feature, and  Best Lead Actress in a feature Film won by Nana Ama McBrown.

Some members of popular feminist group in Ghana, “Pepper Dem Ministries”, have called out ace-broadcaster Nana Aba Anamoah over recent comments she made about taking up traditional roles at home. END_OF_DOCUMENT_TOKEN_TO_BE_REPLACED

Aisha Modi has returned to social media by showing off her newly acquired body. END_OF_DOCUMENT_TOKEN_TO_BE_REPLACED

UK-based Ghanaian international singer and performer, Stephanie Benson has made a shocking revelation about her sexual life that has left fans agape. END_OF_DOCUMENT_TOKEN_TO_BE_REPLACED

Ghanaian actress and movie producer, Yvonne Nelson has opined that special treatment and incentives given to politicians should rather be enjoyed by teachers and doctors. END_OF_DOCUMENT_TOKEN_TO_BE_REPLACED

American rapper DaBaby, has shared his experience with officials at the Lagos airport. END_OF_DOCUMENT_TOKEN_TO_BE_REPLACED