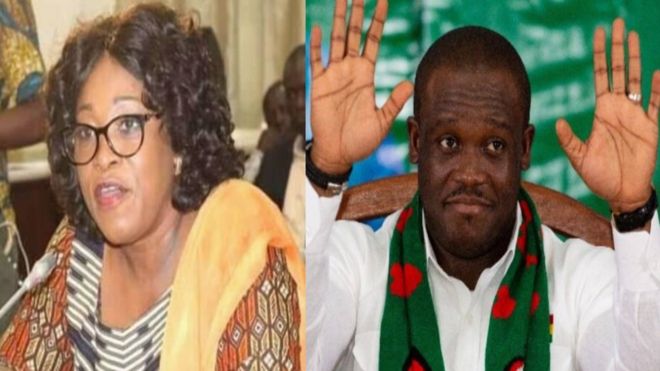 Okudzeto Ablakwa,  in debating the 2019 budget estimates for the Ministry of Foreign Affairs, had alleged that the ministry was going to buy a six-bedroom property whose value had been inflated by over $8 million which translated into GH¢41.7 million. According to him, through their own investigations, they discovered that the six-bedroom apartment was sold at $3,598,108 in 2017, and now the same property is being bought at an outrageous price of $12,218,487. He said even in Norway a Norwegian financial newspaper by name Finansavisen had written about the sale of the property at the quoted price of $3.6 million in 2017. He noted that the new price or the property which is now $12.2 million has been described by Norwegian Real Estates Brokers as ‘unethical’. He, therefore, said that with the inflated cost of the chancellery that the ministry is seeking to purchase, the minority cannot support the approval of the ministry’s budget estimates of GH¢465,576,872. On her part, the minister said the picture the ranking member was painting could not be true. According to her, the ministry had initially wanted to purchase that property to use as chancellery in Oslo but its independent checks found out that the price of the property had been inflated and had therefore decided to back out of that transaction. She said, as the minister, she would not like to supervise or superintendent over any corrupt transactions that would lead to loss of money to the state. “I cannot enter into such transaction that will lead to financial loss to the state,” she said, adding that was the reason why they backed out of the transaction. SOURCE: DAILY GUIDE https://ameyawdebrah.com/i-didnt-collapse-capital-bank-pastor-mensah-otabil/]]>
Related Topics:Ghana parliamentPoliticians
Up Next

Ghanaian rapper, Okyeame Kwame has opined that the new crop of rappers in the industry are far “better” than him and others who have been in the game for two decades. END_OF_DOCUMENT_TOKEN_TO_BE_REPLACED

Ghanaian rapper, Sarkodie may be gearing up to speak against the governance of the nation by the ruling New Patriotic Party (NPP). END_OF_DOCUMENT_TOKEN_TO_BE_REPLACED

Ghana’s social media has been buzzing after a video showing a young  Ghanaian in police escort to go and buy a burger went viral! END_OF_DOCUMENT_TOKEN_TO_BE_REPLACED

Broadcast Journalist at Metro TV, Bridget Otoo has come after employers who fail to pay their workers, yet live lavishly. END_OF_DOCUMENT_TOKEN_TO_BE_REPLACED