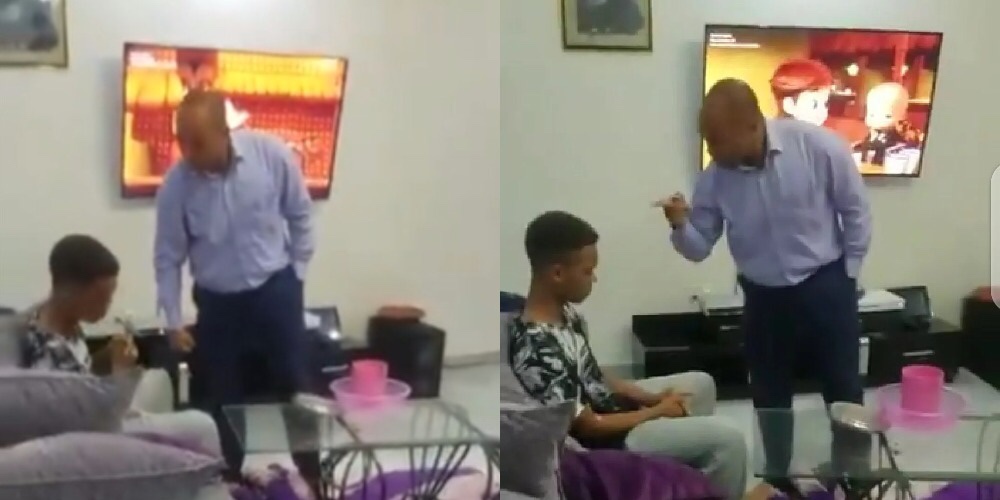 A father has been summoned by the Zambian police over a viral video which showed him beating his son for his poor performance in school exams.

The man who claims to have paid $21,000 as tuition fees in the American International School of Lusaka, Zambia, said his son failed to sit for Math and English but scored A in music while other courses were failed.

”I told you this is a scar on your entire life, do you know the reputation this gives you? You can’t read? You are a big boy you can’t read?’ The father said.

Who probably recorded the video could be heard telling the man not to beat the boy. He replied saying: ”How can you say I should stop beating him, you know what this means..”

The police have now opened an investigation into the matter after the video went viral.

— TRENDING VIDEO : Father Unleash Ultimate Anger On His Sons After Paying $21k Tuition Only For Them To Fail Woefully In Exams.

– The kids also failed to write their Maths and English exams, and the school located in Lusaka, Zambia cost over $21,000. pic.twitter.com/yBeEJbtDHZ

“I don’t know what he drank, ate or smoked”- Ursula Owusu hits back at Captain Smart

Ghanaian rapper, Eno Barony has stated that it has never been her intention to make”controversial” music. END_OF_DOCUMENT_TOKEN_TO_BE_REPLACED

The MELCOM Group of Companies has opened its newest branch, a three-story Superstore at East Legon on the Boundary Road, opposite the Gethsemane Cemetery in Accra. END_OF_DOCUMENT_TOKEN_TO_BE_REPLACED

Ghanaian actress, Nana Ama Mcbrown has recently shared a post on her Instagram page with a caption that has infused worry among her followers. END_OF_DOCUMENT_TOKEN_TO_BE_REPLACED

Popular Nigerian media personality, Toke Makinwa has disclosed that she was robbed in London, Uk. END_OF_DOCUMENT_TOKEN_TO_BE_REPLACED