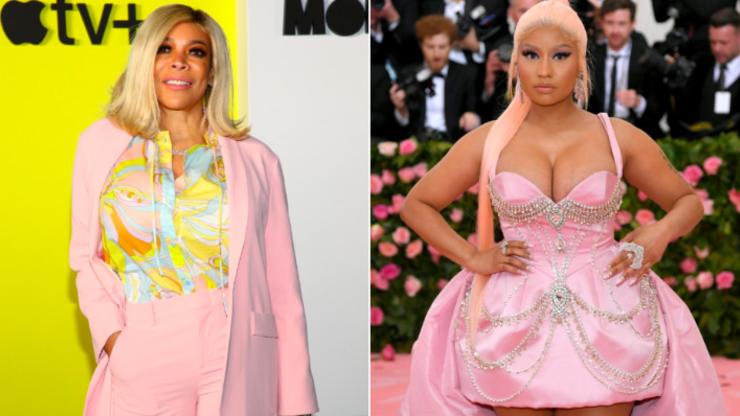 Nicki Minaj fans are dragging Wendy Williams after she seemingly dissed the rapper on her show.

The daytime talk show host took a subliminal shot at the Queen during Monday’s episode of “The Wendy Williams Show.”

“There’s this soon-to-be washed-up rapper who can’t keep my name out of its mouth,” said Williams. “I love it. I sit here like, ‘OK, keep talking. Say some more.’”

This comes after Nicki threw shots at Wendy & her ex-husband on Queen Radio because Wendy criticized Nicki’s marriage.

The Barbz were convinced that she was talking about their idol following Nicki’s comments about Williams on Queen Radio. “It’s not about doing your job,” said Nicki on the Nov. 2 episode (via Complex). “There are people who report the news and there are people who do it with an evil intent in their heart, viciousness. And I pray for you because I know you’re hurting and I know you must be sick and humiliated.”

She also blasted Williams by alluding to her marital woes with estranged husband Kevin Hunter. “When a woman isn’t really being loved at home, the viciousness is a different type. So I really wanted to pray for you today, because look at where you are now in your life,” added Nicki. “You’re sat up there being vicious all this time, and paid for that man’s mistress all these years. You paid for her shopping sprees, you paid for her hotels—bitch, you probably even paid for her GYN bills, you paid to have that baby delivered, ho. How you doin’, stupid. Wake up, hos.”

Williams ignited the feud when she dissed Nicki’s new husband Kenneth Petty on air. “I don’t know what he does for a living, I just know that he did time in jail for—he’s a sex offender,” she said. “Well, she’s no stranger to that because her brother’s in jail for sex offending… Well, first-degree manslaughter. Now, he served seven years in prison and he’s also a sex offender. So that means that he…is a manslaughter a killer? Okay. So, he’s a killer and a sex offender… Well Nicki, congratulations.”

As fans pointed out, Williams praised Minaj on an earlier episode of her show. “When you think of Nicki Minaj, just know she’s a winner. She’s winning,” she said at the time.
SOURCE: Rap-Up
Related Topics:
Up Next

As earlier reported, on Wednesday (June 29), R. Kelly received 30 years in federal prison for sex trafficking and racketeering. Today (July 1), new details have been shared regarding the terms of his sentencing. According to reports, the “Ignition” singer must undergo sexual treatment if he is ever released. END_OF_DOCUMENT_TOKEN_TO_BE_REPLACED

US based British comedian/TV host, James Corden went to the White House as part of a segment for his tv show ‘The Late Late Show’ and posed as president Joe Biden’s personal assistant . END_OF_DOCUMENT_TOKEN_TO_BE_REPLACED

Taylor Swift is engaged to her British boyfriend Joe Alwyn, according to reports. END_OF_DOCUMENT_TOKEN_TO_BE_REPLACED

INTERPOL, in collaboration with the US Secret Service, South African Police and other agencies, has arrested an alleged Nigerian cybercrime kingpin, James Aliyu, in connection with $12m romance scam and business email compromise fraud. END_OF_DOCUMENT_TOKEN_TO_BE_REPLACED