Ghanaian footballer has announced that he has terminated his 4-year-old relationship with his wife, Melissa Satta.

According to the AC Monza player, he and his Italian Model wife were separated for a while but have decided to make their separation permanent.

“After a period of separation, we have decided to terminate our relationship permanently, in full respect of each other’s positions and in complete serenity, while we remain an important reference point for the growth of our son Maddox,’ he wrote in a post on Facebook.

This was his second marriage. His first marriage to Jennifer ended in 2011 and she currently lives in Berlin with his first son Jermaine Prince Boateng. 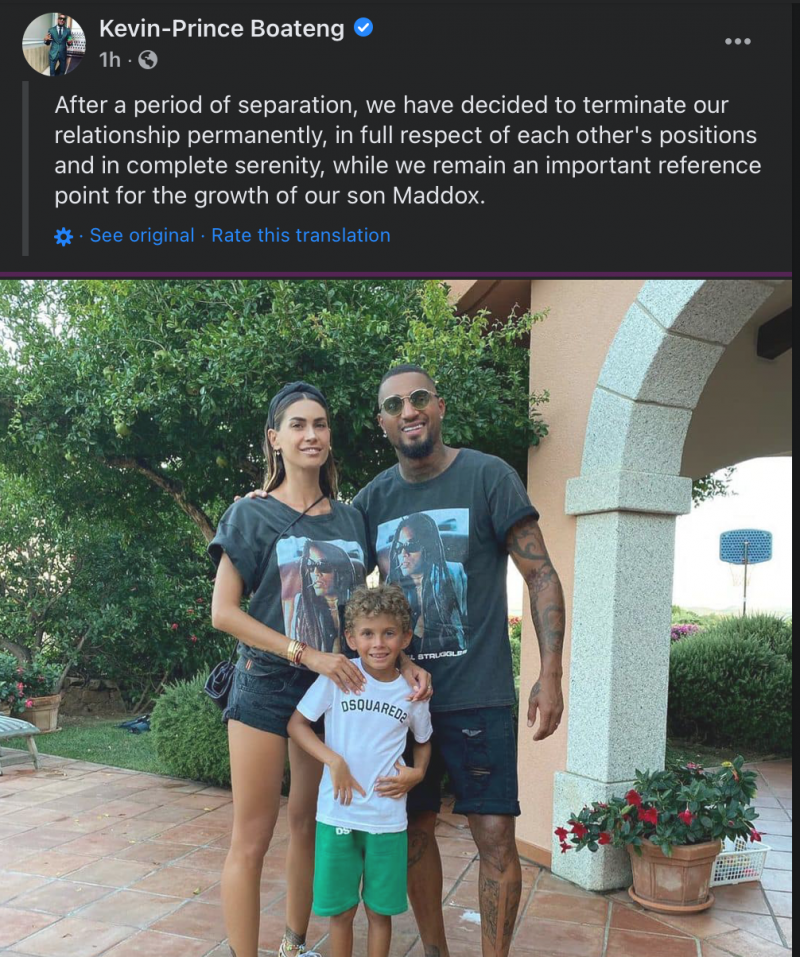 Award-winning rapper, Sarkodie has responded to all the criticism he has faced ever since his feature on Bob Marley & The Wailer’s classic, “Stir It Up” was released. END_OF_DOCUMENT_TOKEN_TO_BE_REPLACED

Ghanaian singer, Efya has caused quite a stir on social media after revealing that she doesn’t know who popular Reggae artiste and Radio Host, Blakk Rasta is. END_OF_DOCUMENT_TOKEN_TO_BE_REPLACED

Ghanaian singer, Efya has reacted to Blakk Rasta’s comments about Sarkodie’s feature on the Bob Marley & The Wailer’s classic, “Stir It Up.” END_OF_DOCUMENT_TOKEN_TO_BE_REPLACED

Award winning Ghana musician who doubles as a physician specialist has stated in a recent interview on Asaase Radio that, the division of fans is rather killing the Ghanaian music industry than helping in building it. END_OF_DOCUMENT_TOKEN_TO_BE_REPLACED

American rapper, Tobechukwu Dubem, better known as Tobe Nwigwe has expressed his admiration for some Ghanaian musicians with whom he would like to collaborate. END_OF_DOCUMENT_TOKEN_TO_BE_REPLACED

Ghanaian Reggae and Dancehall artist, Stonebwoy has revisited the clash he had with Shatta Wale at the 2019 Vodafone Ghana Music Awards. END_OF_DOCUMENT_TOKEN_TO_BE_REPLACED