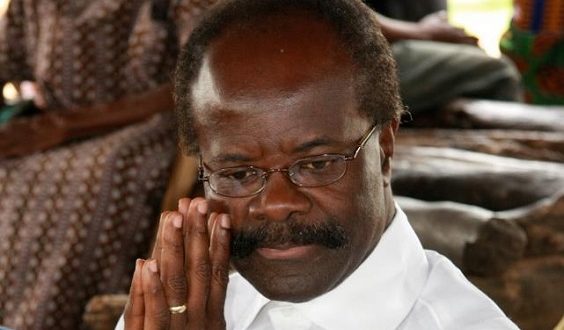 An equity fund and securities investment company based in the United States, Birim Group LLC, has brought charges against the founder and former flagbearer of the Progressive People’s Party (PPP), Dr Papa Kwesi Nduom.

In a writ sighted by myjoyonline, Groupe Nduom, the umbrella company for 60 other businesses owned by Dr Nduom is being accused of laundering a total of $63,000,000.

“The Nduom family defendants, by and through their ownership, control and use of defendants GN Bank, Gold Coast Fund Management and over 60 undercapitalised interrelated companies, collected several million dollars of depositor’s saving, investment contributions and insurance premiums, and in violation of U.S. and Ghana laws illegally laundered approximately $63,000,000 of depositors’ funds through its Virginia-based sham ‘procurement and consulting service’ company, International Business Solutions,” it stated.

Describing Dr Nduom’s operations as one that would “put Bernie Maddoff to shame”, the writ further stated that the purported “criminal scheme” involved “international money wire system – of inflated, over-invoiced and above-market rate fees disguised as payment for ‘management service’”

Dr Nduom, his wife Yvonne Nduom, their children, Nana Kweku Nduom, Edjah Nduom and Nana Aba Nduom in their official capacities in the business are all named as defendants in the suit.

“Plaintiff further alleges that Nduom family defendants dominate and control the Corporate Defendants and the related 60 or more companies, and in so doing, these entities commingle their funds and other assets and fail to segregate the funds of the separate entities. There is also the unauthorised diversion of corporate funds or assets to non-corporate uses”.

The plaintiff, Birim Group LLC further alleges that Groupe Nduom engaged in these illegalities for the “sole personal financial benefit of the Nduom family” and used his businesses as a conduit to “facilitate the unlawful acts”.

Reference was also made to the recent cleanup in Ghana’s financial sector where the plaintiff claims “a substantial portion of its [GN Bank] loans were illegally made to Nduom-related entities without the benefit of appropriate risk assessments, managements or determinants”.

“Groupe Nduom-GH (GN-GH) is wholly owned, dominated and controlled by Nduom and his family for the sole personal benefit of Nduom. Having failed to meet its regulator’s qualifying criteria, defendant GN-GH was initially downgraded and reclassified from a commercial banking house to a Savings and Loans Company.

“On or about August 16, 2019, its license was formally revoked by its regulator, the central Bank of Ghana”.

The plaintiff believes that the “manipulations and liabilities” among Groupe Nduom’s entities effectively resulted in the “diversion of assets from one business entity to the Nduom defendants and their other entities to the detriment of creditors and depositors”.

Among the many reliefs being sought, Birim Group LLC, acting as assignors, are asking for “treble compensatory damages, as well as, consequential, exemplary and punitive damages in an amount to be determined by trial.

They also want the court to order “disgorgement of all profits, benefits and other compensation obtained by defendants including all ill-gotten gains from their illegal and criminal activities.

A case was filed in Federal Court in Chicago in November 2020 against Dr. Papa Kwesi Nduom and related parties.

The Birim Group who filed the lawsuit is led by a lawyer of Ghanaian origin called Kwasi A. Asiedu.

Meanwhile, Nduom’s lawyers say, “The claims alleged by Birim Group LLC are meritless. We have filed for dismissal of this baseless complaint and will make our arguments to the Court.”

Hajia Police Urges The Youth To Be Tolerant And Obedient