Bernard Antwi Boasiako, known as Chairman Wontumi, dragged Nana Ama McBrown, Afia Schwarzenegger and four others before the court for contempt. Following the suit, UTV has rendered a public apology to Chairman Wontumi.

The suit titled: ‘Motion on Notice for Committal for Contempt Order 50, C147,’ read in part:

Wontumi’s suit is an ex-parte motion that is targeted at five respondents in addition to Valentina Nana Agyeiwaa (alias Afia Schwarzenegger). 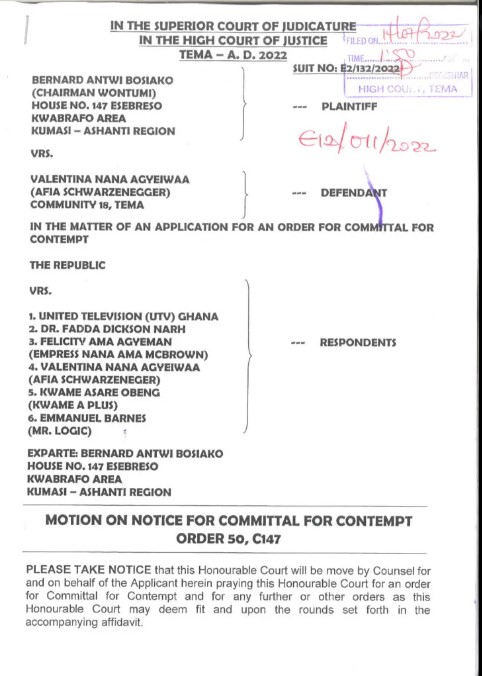 Wontumi is currently in court with Afia Schwar after the socialite proclaimed publicly that she had been in an amorous relationship with the politician.
Last week, UTV hosted Afia Schwar who restated her allegations on the United Showbiz show hosted by Nana Ama McBrown.

Two co-panellists, A Plus and Mr Logic also made pronouncements on Afia’s allegations despite the matter being before the courts. Fada Dickson is joined in the suit by virtue of being the Executive Producer of the programme.

Following the show, many Ghanaians on social media fired the host, the station, and panellists for allowing Schwar to badmouth Wontumi and others on the show.
Days after the backlash and suit, UTV issued a letter to render an apology without prejudice to Chairman Wontumi.

In a letter signed by Fadd Dickson, UTV apologized for any harm or inconvenience Afia Schwar’s appearance and claims on the show might have caused Wontumi.

Related Topics:Chairman Wontumi
Up Next

‘I am the best rapper in Ghana, I don’t want any comparison’ – Lasmid

The woman who led the “Me nsa aka ooo” TV commercial 13 years ago to promote MTN’s Mobile Money (MoMo) has been gifted a 2-bedroom house. END_OF_DOCUMENT_TOKEN_TO_BE_REPLACED

It’s difficult to predict where Stonebwoy will be in the coming days, weeks, months, or years. As a musician with a keen interest in pushing his sound to the world and etching his name in the minds of new fans, 2022 has been described as his busiest music year thus far since gaining mainstream recognition in 2012 with Pull Up—seven years after he made his official debut—the musician confirmed this via social media after his last summer show. END_OF_DOCUMENT_TOKEN_TO_BE_REPLACED

Ghanaian actress, Nana Ama McBrown has revealed that there’s absolutely no bad blood between her and her ex boyfriend, rapper, Okyeame Kwame. END_OF_DOCUMENT_TOKEN_TO_BE_REPLACED

Veteran Ghanaian actor, Kofi Adjorlolo has denied claims that he was set to marry the mother of popular Dancehall act, Shatta Wale. END_OF_DOCUMENT_TOKEN_TO_BE_REPLACED