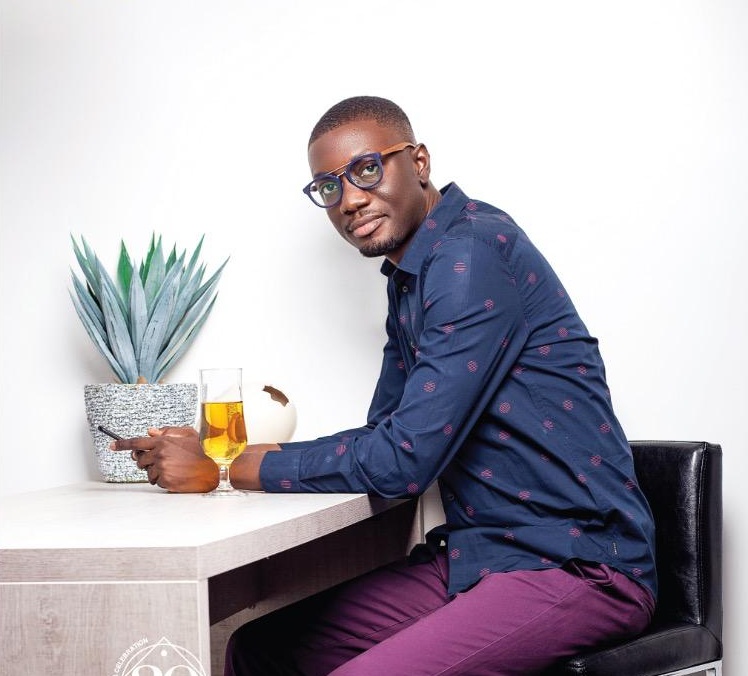 12 years ago, I started a journey in cyberspace that aligned itself to a career path, which I never could have imagined. In the process, I helped to create an online phenomenon that took celebrity and pop culture to new heights in Ghana.

But that was not after an almost two-year stint at Ovation Magazine, where I started entertainment and lifestyle writing after completing Kwame Nkrumah University of Science and Technology. When I was about to leave ovation magazine, I started searching online for publications I could write for. I came across two pan-African portals namely Jamati.com and Orijin-ent.org between August 2007 and October 2007. 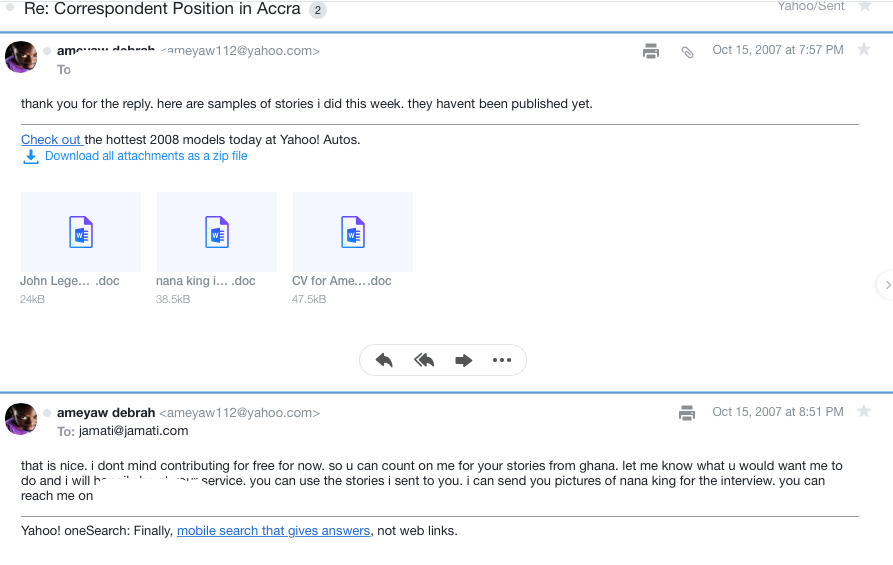 Although I wished they could pay me for my writings, I ended up contributing to both platforms for free. These were platforms operating from the US, so I contributed content from Ghana and Africa regularly, from news to exclusive interviews and features. 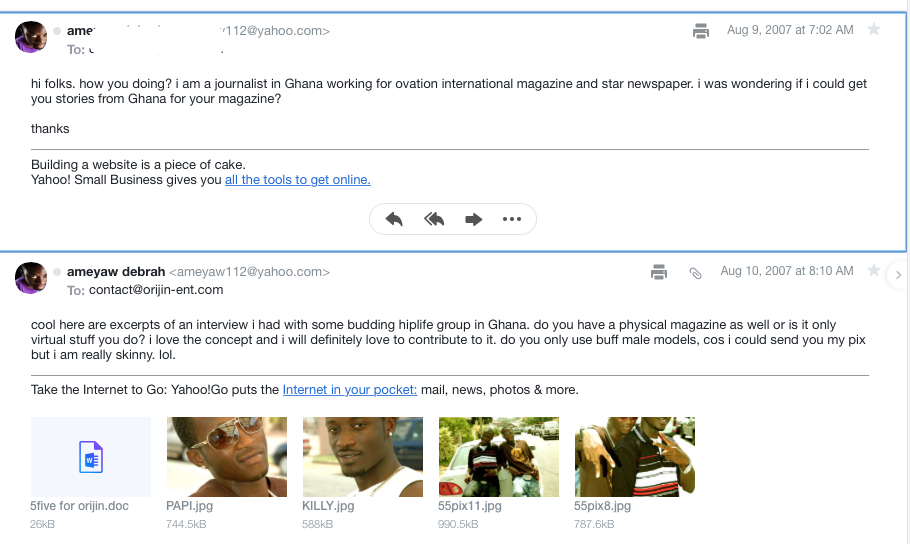 But perhaps the most impactful opportunity came when I met internationally acclaimed photographer, Nana Kofi Acquah that same year, at a gathering to plan a future-parenting magazine, the first of its kind in Ghana. From that acquaintance, Nana Kofi later contacted me about a platform he thought I would be a great fit for. It was a Voice of Africa Media Foundation (VOAMF) project. A project that gave Nokia phones to young journalists across Africa to use in recording, editing and filing stories for Africanews.com.

In November 2007, I sent an email with my interest to the project managers and soon I was accepted. I started creating several news features from politics, to environment and health, although I still had a keen interest in the entertainment space. I used the access I had built in the industry over the years to get in some arts and entertainment features as well on Africanews.com. The beginning of the now

In September 2008, I was invited to speak at the Digital Citizen Indaba as part of the Highway Africa summit in South Africa. It was a gathering of new media workers, cyber activists, digital citizens and journalists from Africa. The theme for the year was Technology for the Digital Citizen and it looked at the empowering technologies that enable anyone to have a digital voice. So I was invited with my colleagues from around the continent to share the story of our Voices of Africa project. 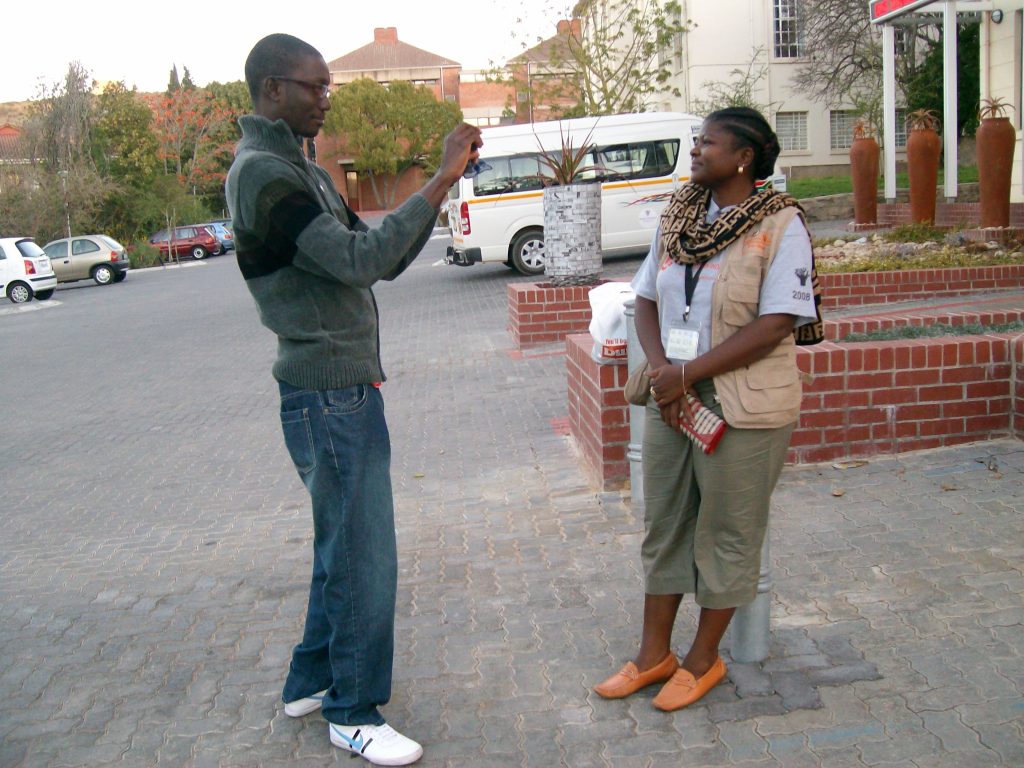 The Highway Africa event featured various personalities and stories in the digital voice agenda from all over the world, and hearing the impact some people had with their blogs in their various countries, was a wake-up-call for me to pay more attention to ‘The Jaded Renegade’, a blog I created earlier that same year for my entertainment writings.

After my return to Ghana, I dedicated more time to the blog and my YouTube channel in general. Just around that time, my work for the Voices of Africa project had caught the eyes of the owners of Ghanaweb and they made a proposition for me to become their content editor. 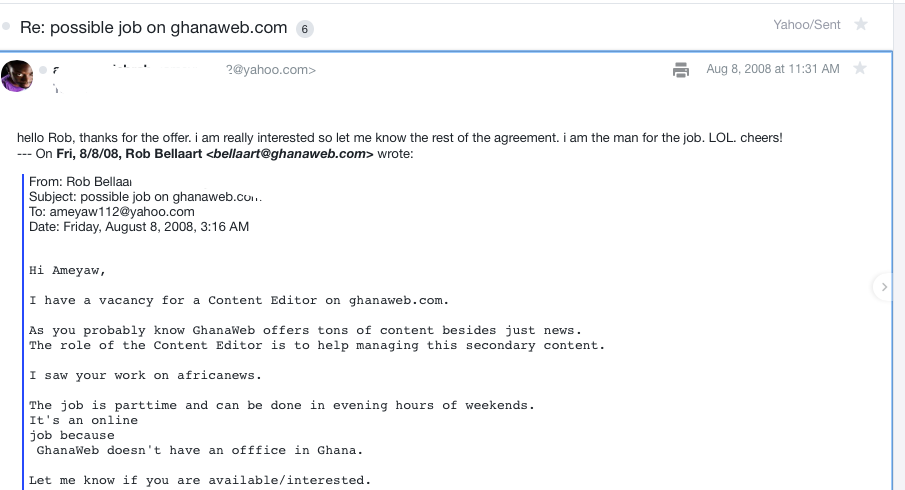 I took up the offer, as my contract with the Voices of Africa project was ending just about the same time. I continued posting on my blog alongside my new job at Ghanaweb, and with the growth of Facebook in Ghana I carved a niche for myself as the go-to-person on Ghana’s pop culture! If anything happened in Ghana, you would find it through me; and if anything major was about to happen, I had the juice in it!

Although I wasn’t the only one with an entertainment ‘website’ around that time, my approach was different, and my focus was refreshing. I focused on building more of a celebrity culture, informing the public on what their favourite stars were up to, and in the process I even helped to create new ones. I turned what I heard on radio or saw on TV to news instantly for the web. I was at every major event, creating content out of them. My contents were picked up and republished on other online platforms and even traditional media as well.

I soon started receiving messages from Chris-Vincent Febiri Agyapong, who was then also building his platform, Ghanacelebrities.com from the UK. He contacted me directly after communications with a ghost account called ‘Ama’ from Ghanacelebrities.com has gone cold! He reached out to me on the connection of our alma mater, Adisadel College. A new friendship was formed, which soon led to me also contributing content to Ghanacelebrities.com for free as well.

Chris-Vincent then helped my to get my own domain, www.ameyawdebrah.com, which was registered on July 19, 2009. He set it up for me and he managed the server for me until the point when I was a little savvy to manage everything myself, that he transferred everything over to me.

We started off managing the website with Joomla, and any time I had server issues I would be on his neck to solve it for me. Around this time I was still contributing to Jamati.com, and I could now publish directly instead of sending my articles via email for them to publish. Jamati.com was running of WordPress, which I found more friendly compared to Joomla. So I suggested to Chris-Vincent that we should switch to WordPress. As stubborn as he is, he was against it initially but later decided to give it a try. We switched to WordPress for both my blog and his website.

With the growth of the Ameyaw Debrah brand came some challenges. My employer from Ghanaweb who was based in the Netherlands came to Ghana for a visit in 2012 and that was when he realized how strong my brand had become in the entertainment space. He started hearing my name on radio and television as a media partner to some events and got worried. He wanted to rather hear the name of Ghanaweb and not mine. 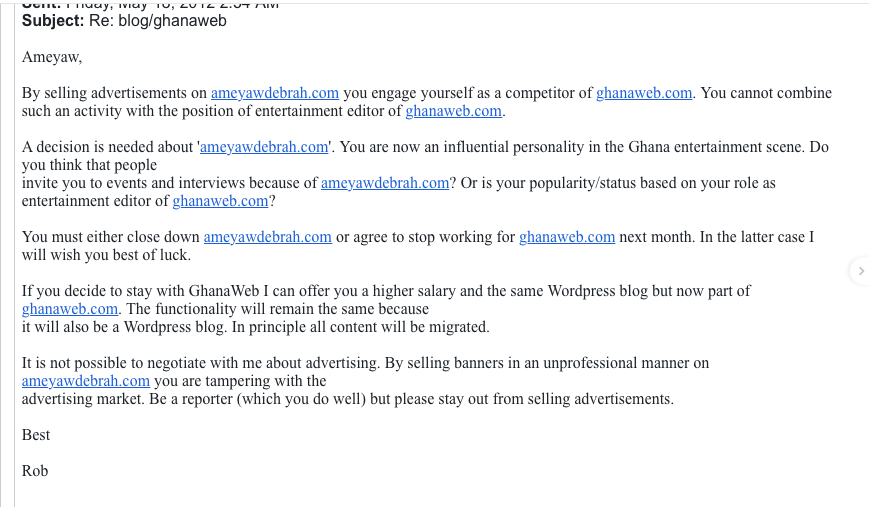 This soon started a back and forth conversation about conflict of interest and how we could resolve it. I was offered a higher salary and also the option of being bought out by Ghanaweb. But I took the difficult decision to go with my brand, which was popular, but not generating any real source of revenue to give me the security I needed. Letting go of a salaried job was difficult! With Ghanaweb out of the way, I now had to find a way to make sustainable income for myself. Google AdSense became my main source of income and at that time, I was making around $400 a month from AdSense.

I was soon hit with some bad news one morning when I woke to an email form Google, saying that my website had been taken off the AdSense program because I had infringed on some of their policies. What a bummer!

This meant that I had to adapt quick and adopt new strategies. And I did! This included charging for promotions that hitherto were done for free, and looking for direct advertisement on my website. The latter was like getting an elephant through the eye of a needle but I remained resolute and focused on building my brand and my reach; and soon advertisers were contacting me.

And with my strategy to include social media in everything I did, my audience and reach across these platforms kept growing to allow me to make money from them.

In September 2013, I registered Ameyaw Debrah Media to formalize my operations and a business.

The glory and the future

God being so good, the years kept getting better. Along the line, I got deals with brands such as Samsung and Vodafone. Malta Guinness also signed me up as an Ambassador for its Africa Rising campaign. I started exploring other avenues with influencer marketing both within Ghana and across the world.

I had successfully built the most authoritative voice on Ghanaian pop culture online. Publications around the world started using my content as sources, and my voice mattered. Everyone who mattered wanted to work with my platforms to promote their works and business. Adding a lifestyle component to the entertainment content opened me up to even more opportunities.

In August 2014, Ringier Ghana reached out to me with an offer to become the Editor in Chief for their new product, Pulse.com.gh. I accepted the offer, this time spelling out clearly that, I would still run my blog fully alongside the new job without it being seen as a conflict of interest. I started employing my team members and by December 2014, we officially launched pulse.com.gh.

I managed the project for six months and moved on to start Yen.com.gh for Genesis Technology Partners. In December 2017, I left Yen.com.gh to again pursue fully the business of Ameyaw Debrah Media.

Inspired by the growth of video content online, I conceived a new project, Ameyaw TV in 2018. The idea was to create exciting video content for various online platforms that would reflect the ideals of www.ameyawdebrah.com over the last decade. We will be producing content on fresh ideas around lifestyle, pop culture, celebrity, events, creativity, entrepreneurship and more.

Ameyaw TV has been my most ambitious project yet. It has been capital intensive; buying equipment and hiring staff. The success of this project would be largely hinged on the growth of digital in Ghana. There is not enough digital marketing in our space; businesses are still stuck in their old ways to a great extent. So far, it has been spending and spending; but I remain faithful that the project will grow as the gem it, is from strength to strength.

The Ameyaw TV team has now become the same force working on www.ameyawdebrah.com, yes finally I have people writing and publishing for me, and I am not doing everything myself.

As I celebrate 10 years of www.ameyawdebrah.com I say a big ‘thank you’ to everyone who has contributed to this journey; my family, the readers, the advertisers, the critics (and well the haters too). What a journey it has been, it wouldn’t have been this meaningful without you!

Beyonce’s ‘The Lion King: The Gift’ … the biggest global spotlight on African music yet!