American Comedian, Eddie Murphy made a historic return to “Saturday Night Live” after 35 years to host the last episode of 2019.

The episode kicked off with a cold open parody of the last Democratic presidential primary debates, followed by Eddie Murphy’s opening monologue.

During the monologue, Tracy Morgan, Chris Rock, and Dave Chappelle all made surprise appearances as they joined Eddie Murphy on stage to riff off one another.

Eddie Murphy, 58, also took a swipe at Bill Cosby , who’s serving three to 10 years in prison after being found guilty in April 2018 on three counts of aggravated indecent assault for drugging and sexually assaulting a woman at his home in 2004 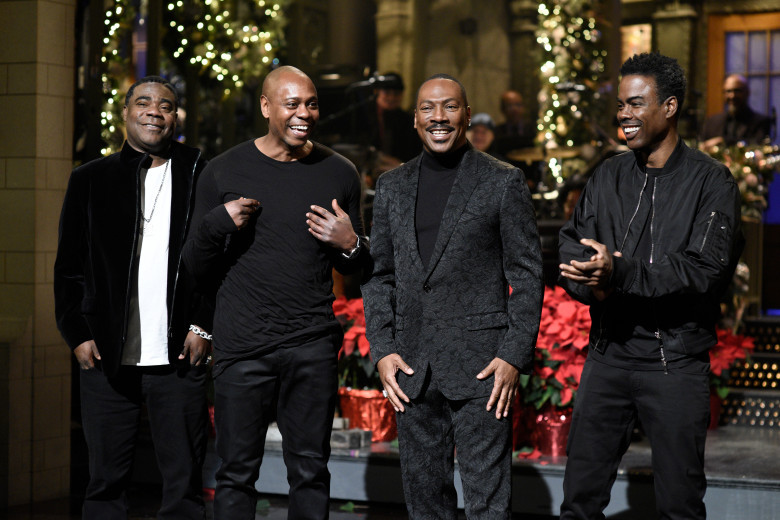 “But if you would have told me 30 years ago that I would be this boring, stay-at-home … house dad and Bill Cosby would be in jail,” Murphy said to laughter, “even I would have took that bet.”

“Who is America’s Dad now?” Murphy joked, in reference to Cosby’s criticism of him as he impersonated Cosby’s Cliff Huxtable, the sitcom character who was once often referred to as America’s Dad.

Murphy who left “SNL” in December of 1984, gave the last episode of 2019 comedy series the highest ratings in two years. The show smashed a 2.5 rating in adults 18-49 and 9.921 million viewers overall in Live+Same Day, according to “fast official” Nielsen numbers ordered by NBC via Deadline.

The last highest-rated and most-watched episode of SNL was in 2017 with host Melissa McCarthy.

Watch: Cardi B gifts her sister a G-wagon on her 24th birthday

Videos have emerged of the moment a Russian ice hockey star who signed a million-dollar contract with an American team was rounded up by Russian policemen and taken to an army enlistment office before he is sent to fight in the war in Ukraine. END_OF_DOCUMENT_TOKEN_TO_BE_REPLACED

A woman who flashed a gun before attempting to make her way into Diddy’s BET after-party was arrested outside the mogul’s house. END_OF_DOCUMENT_TOKEN_TO_BE_REPLACED

Andy Goram has died at the age of 58 after a short battle with cancer. END_OF_DOCUMENT_TOKEN_TO_BE_REPLACED

A woman who went viral 2 years ago for marrying the man who caught the garter after she caught the bouquet at their friends’ wedding, has shared an update on their marriage. END_OF_DOCUMENT_TOKEN_TO_BE_REPLACED

Liverpool star, Mohamed Salah has committed his future by signing the biggest deal in the club’s history. END_OF_DOCUMENT_TOKEN_TO_BE_REPLACED