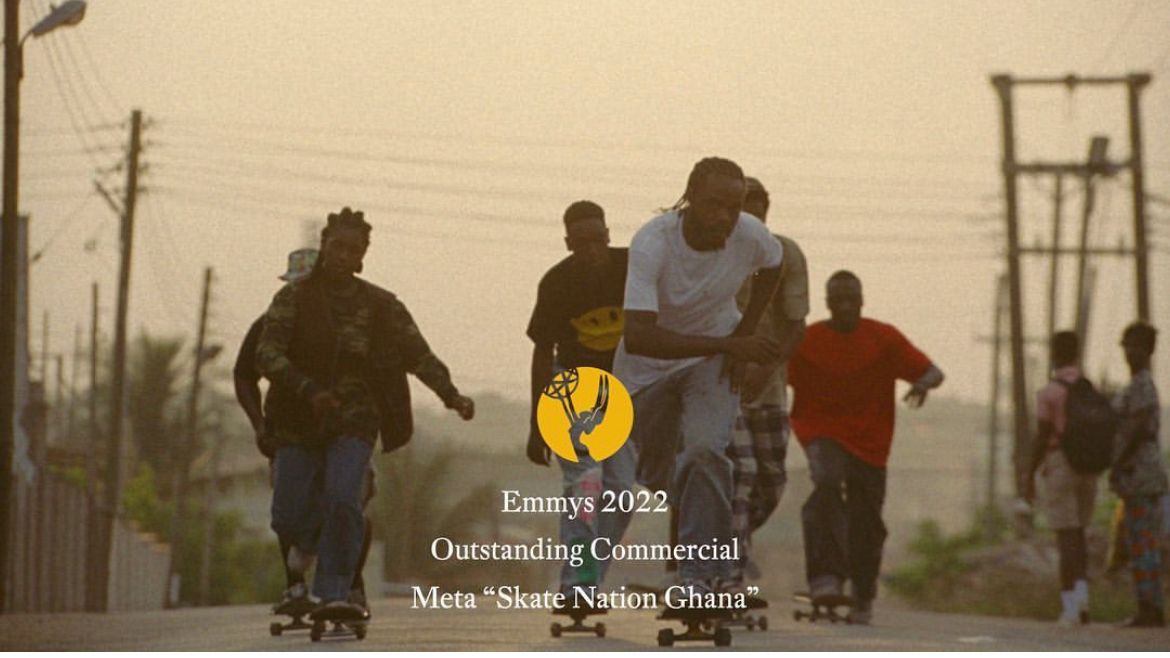 Meta’s Facebook commercial shot in Ghana featuring skateboarders of the ‘Skate Nation Ghana’ has been nominated for the Primetime Emmy Award for ‘Outstanding Commercial’ of 2022.

Created for Facebook to coincide with the 2020 Tokyo Olympics, which eventually took place in the summer of 2021 due to the Covid-19 pandemic, the film looks at the rise of skate culture in Ghana and features the country’s first-ever skate crew, Skate Nation Ghana.

The film tells the story of how the crew came together as shared by founders Joshua and Sandy. It highlights how through social media, they were able to show off their exploits to the wider world.

Read Also: Singer Flavour featured on MTV’s Catfish after his photo was used to scam US woman

The production team used a wide range of effects to make a standout piece of work that felt unexpected and fresh, including traditional 2D animation, time-slice, drone, hand-held, mixed formats, and transitions.

The Primetime Emmy Award for Outstanding Commercial is awarded to one advertisement each year. This year’s nominees include Skate Nation Ghana, Detectives, and The Lost Class.

Related Topics:Stake Nation Ghana
Up Next

Calista Amoateng, 16, has arrived in Ghana after winning the 2022 Miss Teen Tourism World pageant in the Philippines. END_OF_DOCUMENT_TOKEN_TO_BE_REPLACED

Ghanaian actor, Eddie Nartey has bemoaned the current high cost of living in the country. END_OF_DOCUMENT_TOKEN_TO_BE_REPLACED

Self-acclaimed “King of Dancehall” Shatta Wale has hit a major milestone in his music career. END_OF_DOCUMENT_TOKEN_TO_BE_REPLACED

Despite a nasty end to their engagement, Nigerian Afro-beats superstar, Davido and his ex-fiancé and baby mama, Chioma still have a great relationship. END_OF_DOCUMENT_TOKEN_TO_BE_REPLACED

Nigerian superstar, TuFace Idibia has publicly apologised to his wife, Annie Idibia for constantly causing her and his family pain. END_OF_DOCUMENT_TOKEN_TO_BE_REPLACED