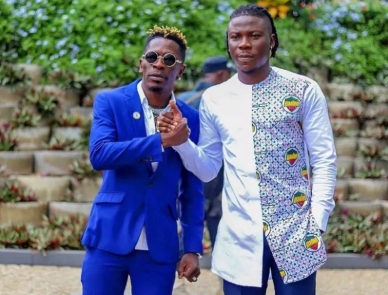 Self-acclaimed Afrodancehall inverntor, Stonebwoy has called on the state to drop its suit against Shatta Wale and himself.

According to him, Shatta Wale and himself have demonstrated that they have risen above the fracas that occurred at the 20th edition of the Vodafone Ghana Music Awards.

“We have lived by example,” he told Andy Dosty in an interview on Daybreak Hitz on Hitz FM Friday, urging that the government should look at the issue again and let the case go.

“We are still hoping that the government would issue a Nolle prosequi by the Attorney-General because we have led by example to be honest.”

He pleaded with the government to drop the case “so we can continue our work…unifying the masses,” and they do not want such a dent on their names.

Stonebwoy and Shatta Wale have pleaded not guilty to charges of Offensive Conduct to Breaches of the Peace.

Stonebwoy, born Livingstone Etse Satekla, also pleaded not guilty to an additional charge of Display of a Weapon in a Public Place without permission.

Shatta Wale and Stonebwoy were arrested by the police over a brawl that erupted between their camps at the 2019 edition of Vodafone Ghana Music Awards.

Asked if he was disappointed that the police ‘arrested’ him, Stonebwoy responded that, “I wasn’t disappointed,” that he was invited by the police because the law had to take its course.

The Adjabeng Magistrate Court, presided over by Mr Isaac Addo, has fixed October 9, 2019, to commence the trial in the case.

Blakk Cedi is now my agent, not my manager – Stonebwoy Confirms

TV3 is not only best in new and entertainment, but best in rewarding its staff too. END_OF_DOCUMENT_TOKEN_TO_BE_REPLACED

The Ave Maria School has launched its 40th-anniversary celebration by urging school leaders to provide better opportunities and platforms for interaction with students in order to guide them in their education. END_OF_DOCUMENT_TOKEN_TO_BE_REPLACED

Sadiq Abdulai Abu, the Chief Executive Officer (CEO) of 3Media Networks has stepped down from his role. END_OF_DOCUMENT_TOKEN_TO_BE_REPLACED