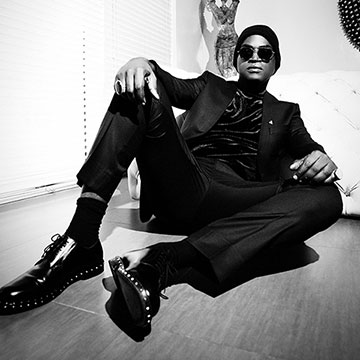 Afro-retro singer and soulful storyteller Ibejii  releases the track Gonto – a dramatic and  expressive piece that touches on the emotional  rollercoaster foisted on us all by CoviD19, Black  Lives Matters, the EndSARS movement of young  people and other recent events.

Gonto is rich in  metaphor and  hugely orchestral,  taking the listener on  a journey that  captures the  impunity of the ruling  class but also the  daring of a new generation whose defeat of fear made EndSARS inevitable. Sung in traditional Yorùbá language,  on Gonto, Ibejii tells a story of defiance by the  younger generation against rich and powerful  oppressors while “leaning on the drive and  aspirations of a new generation, determined to  make its own unique path in the world”.  Produced by DopeL at Natalio Studios in Lagos,  Ibejii says of the release: “Gonto captures the  casual insensitivity of the big and powerful  masquerade (political leaders) and their failure to  give voice and space, to the little masquerades  (ordinary people). It’s the voice of a new  generation who, having defeated fear, insist on  being heard and seen”.

A twin by birth and alter ego by craft, British born Nigerian Ibejii wears his Yoruba ancestry, and  the musical origins it represents, as a mark of  authenticity. With a fine balance of retro-West  African sounds mixed with contemporary Global  elements, his music is truly Global Africa.

Having performed live at various halls in Lagos  and London’s O2 Islington opening for jazz /  afrobeat artist Brymo, Ibejii has also shared the  stage with many notable artists including Celeste,  Dwin and Johnny Drille.

With an EP that expands on Gonto’s EndSARS concept on the horizon and a film about the  subject now in production, Ibejii is an artist with a  bold vision to bring a better world into existence  as we emerge from aloneness, social isolation  and unimaginable loss into a post CoviD world.  Be sure to keep your eyes on Ibejii’s journey  over the coming months as his story unfolds.  Listen on https://bit.ly/GontoDigital

Ghanaian rapper Medikal has been ordered by an Accra Court to be remanded in prison custody for 5 days. END_OF_DOCUMENT_TOKEN_TO_BE_REPLACED

Ghanaian actress and TV presenter, Sika Osei on Thursday, October 21 2021 tied the knot in Accra with her Nigerian fiancé in a beautiful traditional wedding ceremony. END_OF_DOCUMENT_TOKEN_TO_BE_REPLACED

According to a CITI TV report, Ghanaian rapper, Samuel Adu Frimpong, aka Medikal, has been arrested for brandishing a gun in a video on social media. END_OF_DOCUMENT_TOKEN_TO_BE_REPLACED