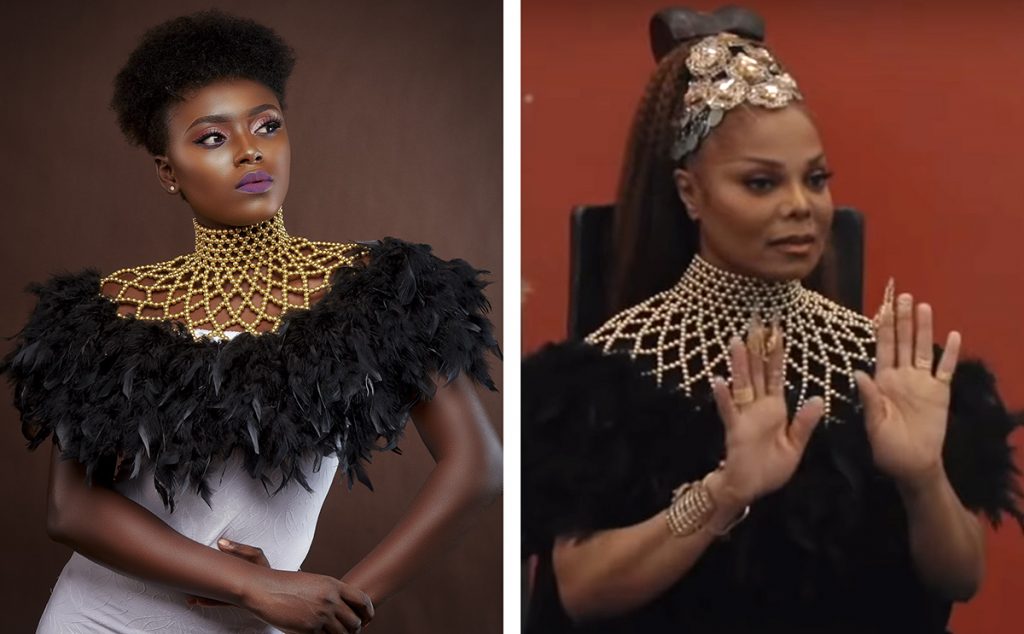 Beauty Shoot[/caption] Legendary artist and sister to the late MJ, Janet Jackson just published a hilarious social media video depicting an audition for her just released ‘Made For Now’ video.

Her first ever social media video sees viral youtube and instagram stars such as @KingBach and @BlameItOnKway auditioning for the queen (Janet Jackson) in an African cultured setting, where she the queen will approve or disapprove of the talents that perform before her, as her brother once did in his video ‘Remember The Times’ in front of Eddie Murphy in an Egyptian style setting.
However, in this case Janet Jackson follows the theme for the ‘Made for Now’ video which is decorated by rich urban African culture and her subjects and performers are all dressed in African prints and jewelry. Janet Jackson, the queen, is seen wearing an amazing statement neck piece by award winning Ghanaian accessory brand Aphia Sakyi.
Her fine choice of jewelry was taken from Aphia Sakyi’s Summer Harmattan collection, titled ’50 Shades Of Print’ and this necklace in particular is called the ‘Yaa Asantewaa’ necklace. The full collection of pieces for ’50 shades of Print’ is set to be released in September and outdoored on the runway for the first time at Accra Fashion Week this October.
Aphia Sakyi Jewelry is regularly worn by high esteems Ghanaian celebrities from the likes of Yvonne Okoro, Ebony, Princess Shyngle and more. The collaboration between Aphia Sakyi and Janet Jackson is definitely an eye opener and inspiration to young creatives in the African fashion to reach much higher.
]]>
Related Topics:aphia sakyiJanet Jackson
Up Next

‘WogbeJeke’ enters next phase with play about Azumah Nelson