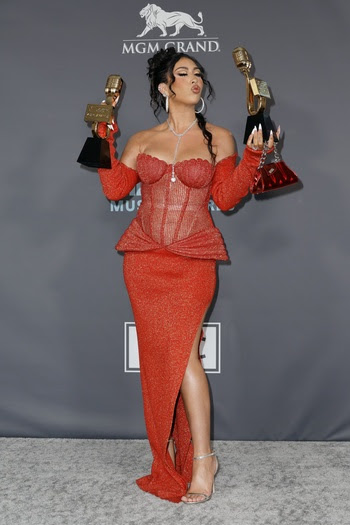 Grammy-winning artist Kali Uchis won Top Latin Female Artist and Top Latin Song for “telepatía” at the 2022 Billboard Music Awards last night, where she was a finalist in four categories total.
Additionally, Uchis is nominated for six Latin American Music Awards this year for New Artist of the Year, Song of the Year for “telepatía,” Favorite Artist – Female, Favorite Artist – Pop, Favorite Song – Pop for “telepatía” and Viral Song of the Year for “telepatía.”
Uchis recently won Favorite Latin Song for “telepatía” at the 2021 American Music Awards. The track has accumulated more than 2 billion global streams after hitting #1 on Billboard’s Latin Airplay and Latin Pop Airplay charts and topping Latin Digital Song Sales for ten weeks straight. It is the longest running Spanish-language song by a solo act on the Billboard Hot 100 this decade (23 weeks). Additionally, her Spanish-language album Sin Miedo (del Amor y Otros Demonios) ∞was nominated for Best Música Urbana Album at the 64th Annual Grammy Awards.
Last year, Uchis won her first Billboard Latin Music Award for Latin Pop Album of the Year, her first Grammy for Best Dance Recording with Kaytranada and her first Premios Nuestra Tierraand Univision Premios Juventud awards. She also performed at the Hispanic Heritage Awards on PBS, where she was also recognized as the 2021 Inspira Honoree.
Related Topics:Kali Uchis
Up Next

Videos have emerged of the moment a Russian ice hockey star who signed a million-dollar contract with an American team was rounded up by Russian policemen and taken to an army enlistment office before he is sent to fight in the war in Ukraine. END_OF_DOCUMENT_TOKEN_TO_BE_REPLACED

A woman who flashed a gun before attempting to make her way into Diddy’s BET after-party was arrested outside the mogul’s house. END_OF_DOCUMENT_TOKEN_TO_BE_REPLACED

Andy Goram has died at the age of 58 after a short battle with cancer. END_OF_DOCUMENT_TOKEN_TO_BE_REPLACED

A woman who went viral 2 years ago for marrying the man who caught the garter after she caught the bouquet at their friends’ wedding, has shared an update on their marriage. END_OF_DOCUMENT_TOKEN_TO_BE_REPLACED

Liverpool star, Mohamed Salah has committed his future by signing the biggest deal in the club’s history. END_OF_DOCUMENT_TOKEN_TO_BE_REPLACED