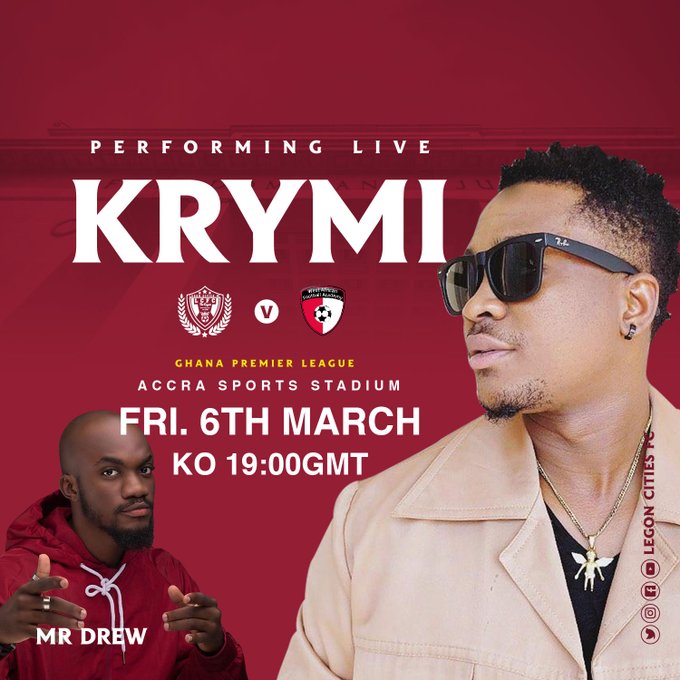 Henry Nuamah, popularly known in the music circles as Krymi, will be performing at the Accra Sports Stadium when Legon Cities take on WAFA on Friday 6th March at 7 pm.

Krymi took to his Twitter handle to break the news that he will be performing at the Accra Sports Stadium during the Legon Cities game against WAFA on Friday.

Legon Cities will come face to face against West African Football Academy (WAFA) on Ghana’s Independence Day at the Accra Sports Stadium on matchday 13 of the Ghana Premier League.

The management of Legon Cities have once again arranged for a top-notch musical artiste to perform during their much-anticipated game.

This time around it is in the person of Krymi whose song “Dwe” with Mr. Drew, featuring Sarkodie has been dominating the airways for the past couple of weeks.

He is expected to give the spectators a good treat of music on the night.

Legon Cities who have aimed at entertaining fans with good football and music have had artiste such Shatta Wale, Medikal, Kwesi Arthur and Wendy Shay, performing at their games.

Highly talented vocalist Luta has announced his return to the music scene after a long hiatus as he prepares to relaunch his career with a new song.
END_OF_DOCUMENT_TOKEN_TO_BE_REPLACED

It looks like it’s a ‘year of homes’ for Ghanaian celebrities and the latest glimpse comes from the beautiful home is Broadcast Journalist Serwaa Amihere. END_OF_DOCUMENT_TOKEN_TO_BE_REPLACED

Ghanaian artist Amerado has announced the release of his debut career album titled God Is Never Asleep shortened as G.I.N.A. The announcement was made in the middle of his trending beef with fellow rapper LJ. END_OF_DOCUMENT_TOKEN_TO_BE_REPLACED

Global streaming giant Spotify is proud to announce that Sio has been selected to join the EQUAL Africa programme aimed at spotlighting female artists across the continent. END_OF_DOCUMENT_TOKEN_TO_BE_REPLACED