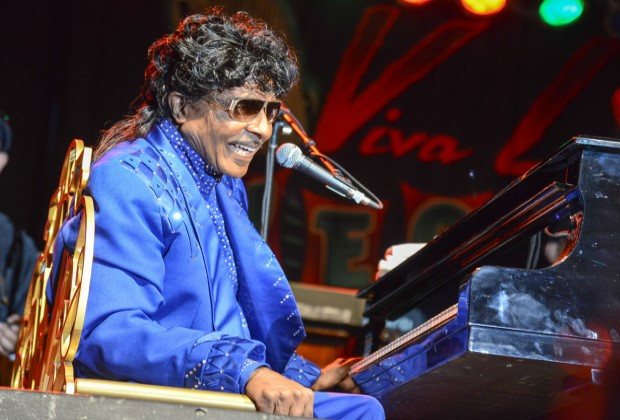 Considered one of the founding fathers of rock ‘n’ roll, Little Richard passed away Saturday morning at the age of 87.

His death was confirmed by his son, Danny Jones Penniman, to Rolling Stone, who also confirmed through his music lawyer, Bill Sobel, that the cause of death was bone cancer.

Former First Lady Michelle Obama took to Twitter to remember the singer. “With his exuberance, his creativity, and his refusal to be anything other than himself, Little Richard laid the foundation for generations of artists to follow,” she shared. “We are so lucky to have had him. Sending all my love to his family and friends today.”

Hollywood A-listers like Reese Witherspoon also commemorated his legacy. “What a legend. RIP Little Richard,” the Big Little Lies actress captioned a clip of him singing.

Fellow music icon Mick Jagger wrote, “I’m so saddened to hear about the passing of Little Richard. He was the biggest inspiration of my early teens and his music still has the same raw electric energy when you play it now as it did when it first shot through the music scene in the mid 50’s. When we were on tour with him, I would watch his moves every night.”

Demi Moore posted a throwback to her 1987 wedding to Bruce Willis, which the rock icon officiated. “Remembering #LittleRichard today… Bruce and I were so lucky and honored to have him officiate our wedding back in 1987 — thankful for the memories. Rest easy,” she wrote on Twitter.

Meanwhile, actor Viola Davis referred to him as “The Originator.” She wrote, “The musician, performer who influenced generations of artists….has left. You were AWESOME #LittleRichard!!! Your talent will reverberate forever. Well done sir. Rest well.”

Musician Chance The Rapper also remembered the legend on Twitter, informing fans that he had been reading up on his Wikipedia page just weeks prior to his death. “A couple weeks ago I randomly decided to read up on the legendary Little Richard on wiki. I learned then about how he developed The Beatles and saved The Rolling Stones.”

The WWE also issued a statement about the death of the “Founding Father of Rock,” writing, “WWE is saddened to learn that Little Richard…one of the most influential musicians of all time, passed away today at age 87.” Little Richard iconically performed at WWE’s WrestleMania X in 1994. “Little Richard made an indelible mark on the WWE Universe with a stirring performance of ‘America the Beautiful’ at WrestleMania X in Madison Square Garden…WWE extends its condolences to Little Richard’s family, friends and fans,” the statement also read.

Related Topics:Little Richard
Up Next

Amber Rose is no longer taking a dip in the dating pool. END_OF_DOCUMENT_TOKEN_TO_BE_REPLACED

Chris Brown is no stranger to the fashion industry. He’s already developed a clothing line, Black Pyramid. Now, he’s decided to sell some more swag. Yesterday (Jan. 24), the Grammy-winning artist went on his Instagram Story to inform his followers that he’s built a department store near the comfort of his home. END_OF_DOCUMENT_TOKEN_TO_BE_REPLACED