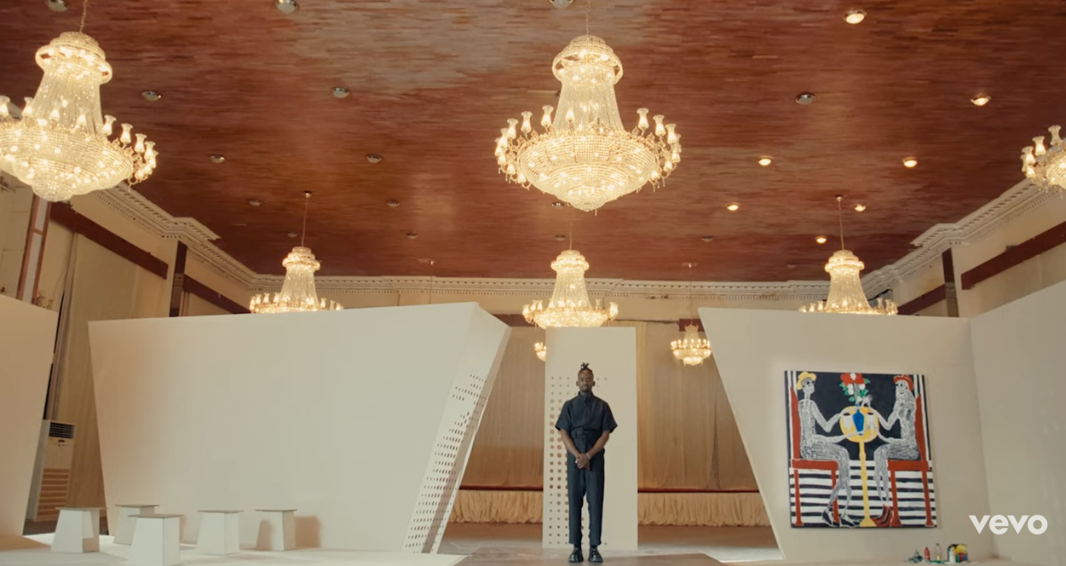 The visuals were filmed at an invite-only event in May at a disused hotel in Lagos, Nigeria’s Lekki area. Inspired by his growing interest in platforming African art, Mr Eazi sees his as-yet-untitled debut album as a collection of art pieces. (Eazi considers his earlier full-length projects, Life is Eazi, Vol. 1: From Accra to Lagos and Life is Eazi, Vol. 2: From Lagos to London as mixtapes).

Read Also: Private and Intimate – Mr Eazi and Temi Otedola open up about their wedding plans

Each single from the album will be represented in the form of a series of uniquely commissioned pieces from different African visual artists. These pieces will be tokenized and shared with the public through specially curated metaverse and physical events.

For “Legalize,” Mr Eazi tapped Patricorel, whose work he was introduced to while recording for the album in Cotonou, Benin. While the track finds Eazi exposing his emotions as he celebrates his love for fiancee Temi Otedola, Patricorel’s painting by the same name simultaneously captures the intimacy of love, submission, vulnerability and the finality of death.

“I see the instrumental as a canvas….just like Patricorel…It’s a plain canvas and you don’t know what you will create,” Eazi explains. “What struck me was the fact that he represents love with his pieces, but he draws with skeletons. I think skeletons are our most human, naked form.”

Bose Ogulu has told her son Burna Boy to “tone down the madness” as she celebrated his birthday. END_OF_DOCUMENT_TOKEN_TO_BE_REPLACED

The Hewale Lala (Song Of strength) hit maker Perez Musik gets ready to have his first-ever major concert. END_OF_DOCUMENT_TOKEN_TO_BE_REPLACED

Kofi Sonny, CEO of 610Music, a direct representative for Universal Music Group in Africa, unveiled two of his newly signed artistes to the world over the weekend. The event pulled in dignitaries from all over the globe to witness what many have dubbed “the birth of greatness.” END_OF_DOCUMENT_TOKEN_TO_BE_REPLACED

GuiltyBeatz is ringing in the summer! The Grammy-nominated Ghanaian producer and DJ is back with another dazzling solo effort – an Amapiano-infused dance anthem ‘Universe’ featuring Pop sensation, Mr Hudson and buzzing Ghanaian singer, Twitch 4EVA. END_OF_DOCUMENT_TOKEN_TO_BE_REPLACED