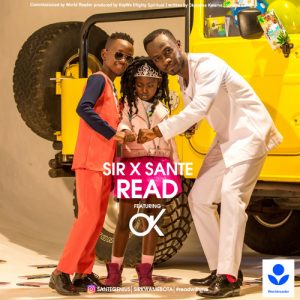 The song is a part of a huge project by Worldreader, an NGO, in collaboration with Amazon and the Ministry of Education in celebration of National Reading Day.

The project seeks to engage kids in reading sessions which will be shared across various social media platforms in a bid  to inculcate the spirit of reading among children and the general public.

The song and its video were launched on September 25, 2018 at the British Council in Accra. 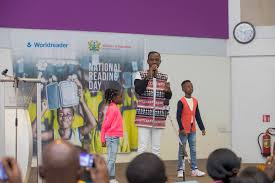 Sir Bota, Sante and OK at the Launch

Speaking at the launch, Sir Bota acknowledged how his father’s appointment as Reading Ambassador influenced their new project.

“My papa Okyeame Kwame was made reading ambassador not long ago. This got my sister Sante and I excited because it is a big part of what he encourages us to do always,” he said.

Sir and Sante are not new to music. Last year, they were featured on their father’s song ‘Saucing.’

Bose Ogulu has told her son Burna Boy to “tone down the madness” as she celebrated his birthday. END_OF_DOCUMENT_TOKEN_TO_BE_REPLACED

The Hewale Lala (Song Of strength) hit maker Perez Musik gets ready to have his first-ever major concert. END_OF_DOCUMENT_TOKEN_TO_BE_REPLACED

Kofi Sonny, CEO of 610Music, a direct representative for Universal Music Group in Africa, unveiled two of his newly signed artistes to the world over the weekend. The event pulled in dignitaries from all over the globe to witness what many have dubbed “the birth of greatness.” END_OF_DOCUMENT_TOKEN_TO_BE_REPLACED