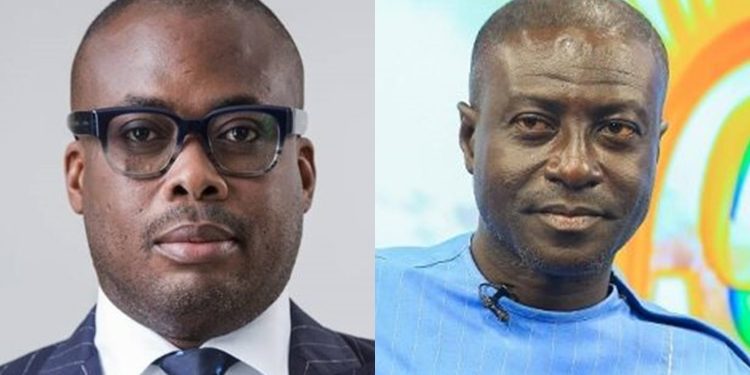 Broadcaster and Board Chairman of the Ghana Airport Company, Paul Adom-Otchere, has filed a defamation suit against Blessed Godsbrain Smart, also known as Captain Smart, and Media General Ghana Limited.

Adom-Otchere is seeking GH10 million in restitution for the harm done to his reputation as a result of comments made against him by Captain Smart on Onua FM/TV.

The host of Good Evening Ghana on Metro TV claims that on August 26, 2022, the plaintiff made defamatory remarks about him and accused him of being a corrupt journalist on Onua FM/”Onua TV’s Maakye” show.

Mr. Adom-Otchere, the host of Good Evening Ghana on Metro TV since 2001, expressed dissatisfaction with the comments, claiming that they tarnished his image and lowered his reputation in the eyes of well-meaning people in society.
The broadcaster claimed in his High Court writ that the disparaging remarks had made him appear contemptible in the eyes of his peers and other right-thinking people.

The Chairman of the Ghana Airport Company Board, among other things, wants the court to rule that Captain Smart’s remarks are defamatory and to award “damages in the sum of 10 million Ghana cedis for the defamatory statements made by 1st Defendant on Onua TV and Onua FM.”

He also wants “compensatory damages for the harm done to his reputation, as well as aggravated damages for the reckless and malicious publication of the defamatory words.”
He also wants the court to order the defendants to retract and apologize for the comments “on all media platforms operated by the second defendant,” as well as a “injunction restraining the defendants from further publishing and causing to be published the said similar words defamatory of the plaintiff.”

Related Topics:Captain Smart
Up Next

The University of Wolverhampton confers a doctoral degree on Adesua Etomi

What a time to be an African! On the back of a successful Global Citizen Festival in Accra, and a visit of  Recording Academy CEO, Harvey Mason Jr to Ghana, his first trip to West Africa, it appears that Afrobeats may soon get its individual shine at the Grammys! END_OF_DOCUMENT_TOKEN_TO_BE_REPLACED

The School of Graduate Studies of the University of Professional Studies (UPSA) has honoured Ghanaian musician, Rebecca Acheampong known popularly as Becca for her outstanding academic achievements. END_OF_DOCUMENT_TOKEN_TO_BE_REPLACED

Platinum selling artist, KiDi has reacted to the resurfacing of his old tweets on the social media platform. END_OF_DOCUMENT_TOKEN_TO_BE_REPLACED