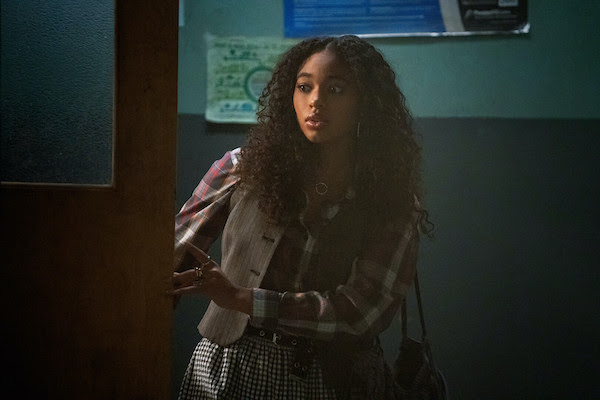 Hailed by The Daily Beast as “the next great teen drama,” Pretty Little Liars: Original Sin is now available to binge on Showmax.

Twenty years ago, a series of tragic events almost ripped the small town of Millwood apart. Now, in the present day, a brand-new group of Little Liars finds themselves tormented by an unknown assailant, known only as “A”.

Created by Chilling Adventures of Sabrina’s Roberto Aguirre-Sacasa and Lindsay Calhoun Bring, the 10-part series has an 88% critics’ rating on Rotten Tomatoes.

Based on the bestselling book series by Sara Shepard, the Pretty Little Liars franchise kicked off in 2010 with the beloved original series that won 38 Teen Choice Awards over its seven-season run, including a Scene Stealer Award for South African Sasha Pieterse as bully Alison DiLaurentis. Two single-season spin-offs – Ravenswood and Pretty Little Liars: The Perfectionists – were added to the cannon in recent years.

Original Sin revives the hit franchise with an eerie new setting, a sharp left into the horror genre that the original took its time coming around to, and an all-new line-up of teens we can’t wait to meet  (with the bonus of a literal Karen we can’t wait to hate).

“Pretty Little Liars was a worldwide phenomenon, with a rabid fanbase, and we wanted it to feel different from the original,” says Roberto, who also created Riverdale. “We wanted to lean more into the horror genre, the slasher genre.”

“We knew that we wanted to bring A to life in a very different way, making A a slasher villain, akin to Michael Myers,” says Lindsay.

“One of the most primal emotions that we as humans can experience is fear,” says Roberto. “When you’re a teenager, you start to see the world for what it really is, as a dangerous place. I think that’s why horror and teenagers go so well.”

The girls find themselves constantly being watched and, Chandler says, “The omnipresence of A is very frightening.”

“The fact that this killer has no face, has no name, is almost like an implacable force of nature, all that adds to the uncanny sense of dread. Everywhere these girls turn, there’s a threat,” says Roberto.

And the threats aren’t just the stuff of horror movies either. Chandler says the Little Liars also have to deal with “the internal horror [of] these very real, grounded terrors that happen to women every day.”

Apart from all the nods to old-school horror classics, fans of the franchise (and Riverdale) can look forward to a tonne of Easter Eggs, ramping up from episode 6, all the way to the final moments.

The consensus from those who’ve seen the finale is that it pays off perfectly. The final three episodes of the season, says TVfanatic, “will go down as the best hours in the history of the franchise.”

As Paste Magazine put it, “For fans of the original series, this show is a must-watch… it absolutely delivers on its promise to bring more of that classic teenage drama to our screens once again, with a sinister twist… [and] for those unfamiliar with Pretty Little Liars… this show is a perfect place to jump in.”

A recap of the most exciting happenings, news and drama from #BBNaija that trended on #TwitterGhana in August

Meet Patience Agana, an unemployed lady who created a COVID-19 relief fund to support her community

In an immature society culture is an import; for a mature one it is a native manufacture which eventually becomes an export. – Northrop Frye. END_OF_DOCUMENT_TOKEN_TO_BE_REPLACED

This Week’s Episode Features a Conversation With K.O, the 5 Hottest Tracks of the Week, Africa Rising and Dadaboy Ehiz’s Favourite Track of the Week! END_OF_DOCUMENT_TOKEN_TO_BE_REPLACED