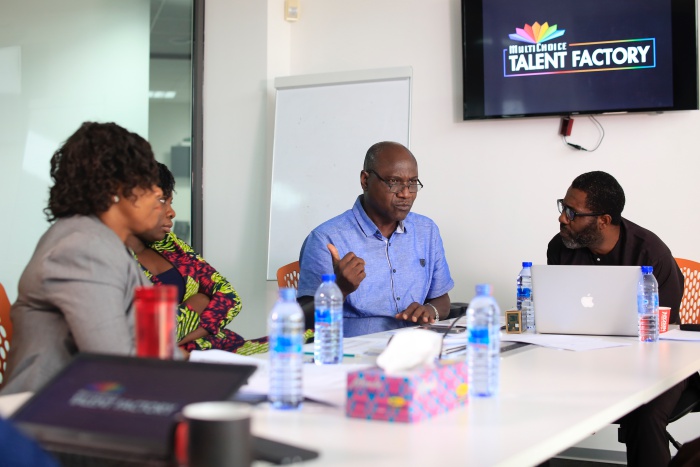 The West Africa Academy of the MultiChoice Talent Factory, received a donation of over 300 books related to television and film for its library earlier this week from different visiting lecturers. The books are expected to complement the teaching and learning of the ethics and practice of film and television for the students from across the West African sub region.   Former Rector, National Film and Television Institute, NAFTI, Professor Abraham Linus donated some copies of his book, “Effectiveness of Cartoons as a Uniquely Visual Medium for Orienting Social Issues” to the MTF Academy. Speaking to the students he charged them strive to become good filmmakers, accenting that Africa holds rich and impactful stories which can only be told by the African storyteller.  As a visiting lecturer Prof. Abraham, will be sharing his rich experience inVisual Communication, Broadcast Journalism, Cultural Studies and News Media Studies with the maiden batch of MTF students. Prior to Prof. Abraham’s donation, many well-meaning individuals and industry players such asMr. Emeka Mba, former Director-General of the National Broadcasting Commission, NBC, Committee for the Relevant Arts, CORA, and Lilian Amah, a movie producer and author also presented several copies of their books to the MTF library. The books, which cover a vast range of subjects, including the arts, biographies, autobiographies and contemporary novels. The students were highly appreciative of the kind gesture promising to make good use of these books to improve their skillset and knowledge base.   MTF is an initiative of MultiChoice Africa which recognises the critical role MultiChoice can play in society to be the driving force behind the development of future talent; to help build and strengthen the creative industries across Africa and to play a positive role in Africa by helping to grow Africa’s creative industries into vibrant, economic powerhouses.            ]]>

The relationship, the breakup…Who is Alex Parvenu? Part 2