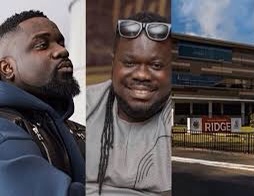 Award winning rapper Sarkodie has added his voice to the controversies surrounding the death of Obour’s father.

The rapper in tweet revealed he recently had a conversation with the former MUSIGA President concerning his father’s demise and that if what he was told is the truth, Ridge Hospital should be faced with legal action for saying Obour’s father died from COVID-19 complications.

The rapper who did not disclosed what Obour told him during their conversation added that “I want to know if his Dad’s test report is out confirming cause of death …” Cos for such information to b out there with no final test result ( if that’s true ) that’s totally wrong,”

I can’t be disappointed in Zapp Mallet, I take respect very seriously- Sarkodie

Highly talented vocalist Luta has announced his return to the music scene after a long hiatus as he prepares to relaunch his career with a new song.
END_OF_DOCUMENT_TOKEN_TO_BE_REPLACED

It looks like it’s a ‘year of homes’ for Ghanaian celebrities and the latest glimpse comes from the beautiful home is Broadcast Journalist Serwaa Amihere. END_OF_DOCUMENT_TOKEN_TO_BE_REPLACED

Ghanaian artist Amerado has announced the release of his debut career album titled God Is Never Asleep shortened as G.I.N.A. The announcement was made in the middle of his trending beef with fellow rapper LJ. END_OF_DOCUMENT_TOKEN_TO_BE_REPLACED

Global streaming giant Spotify is proud to announce that Sio has been selected to join the EQUAL Africa programme aimed at spotlighting female artists across the continent. END_OF_DOCUMENT_TOKEN_TO_BE_REPLACED