Hip-life “Grandpapa,” Reggie Rockstone has expressed anger and disgust at a fan who threatened to gang rape his 6-year-old daughter.

According to the rap legend, he was invited for a live interview on Hitz FM this morning and during the interview, he was asked how his household is like.

He stated that he told the interviewer that his wife is a Shatta Wale fan and his daughter is a Stonebwoy fan.

After the said interview, Reggie stated that the fan by the name Abdul Basit  tweeted at him saying:

“Carry her give us make we play gala.” 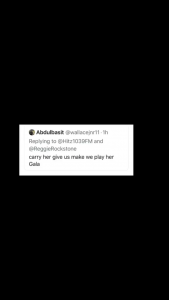 His tweet did not go down well with Reggie who in an Instagram video earlier today, expressed his disgust and threatened to beat up the guy.

Reggie also posted a photo of the guy including a screenshot of the tweet and has asked the general public to help track him down.

This is the photo of Abdul Basit. Related Topics:Reggie Rockstone
Up Next

Global streaming giant Spotify is proud to announce that Sio has been selected to join the EQUAL Africa programme aimed at spotlighting female artists across the continent. END_OF_DOCUMENT_TOKEN_TO_BE_REPLACED

UK-BASED Ghanaian Gospel musician, Joe Bamfro has been nominated in the Gospel Song of The Year category in the upcoming Ghana Music Awards UK(GMA UK) scheduled for October in the United Kingdom.
His song Moko Be did the trick for him and Joe Bamfro is besides himself with excitement being the first time he has ever been nominated in an awards scheme. END_OF_DOCUMENT_TOKEN_TO_BE_REPLACED

Organizers of the prestigious Ghana National Gospel Music Awards have announced a date for the most anticipated event. END_OF_DOCUMENT_TOKEN_TO_BE_REPLACED