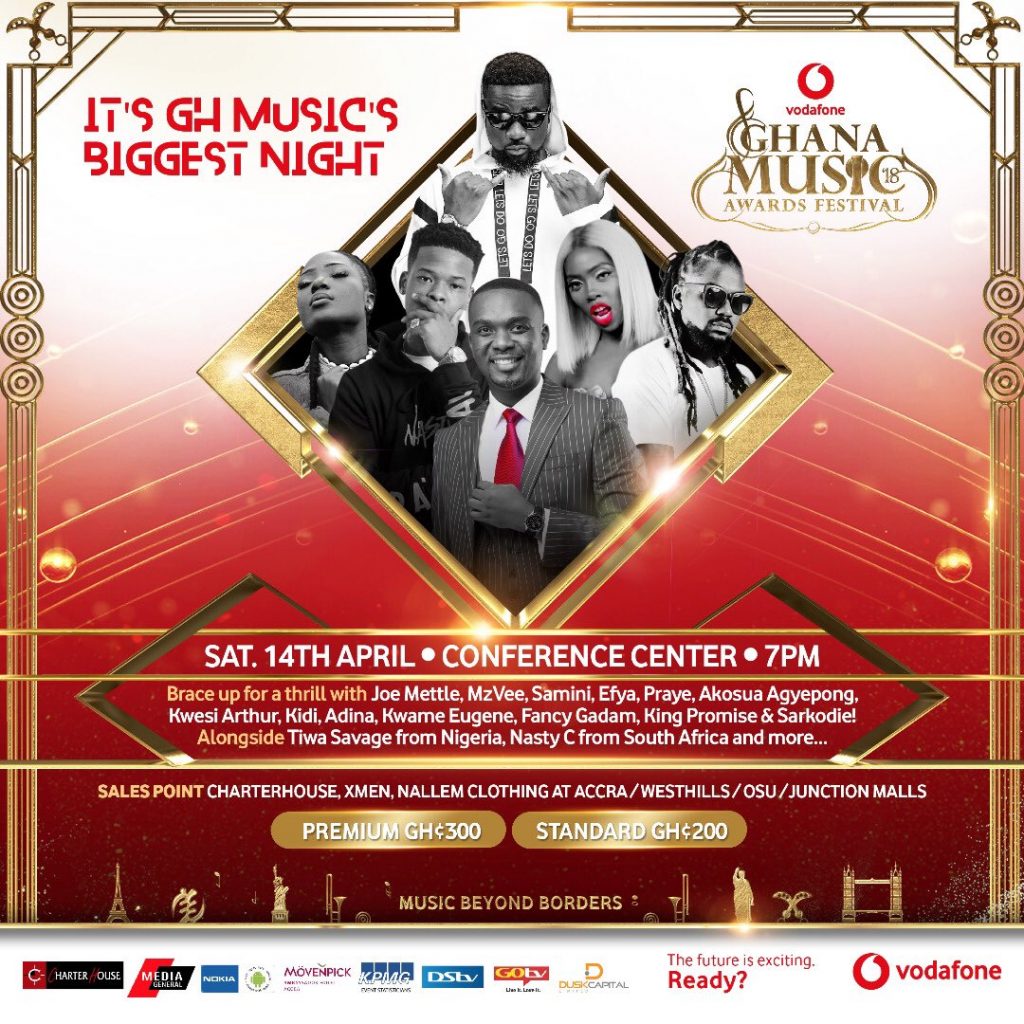 Finally! The list GH has been waiting for is out. If there’s anything related to the Vodafone Ghana Music Awards that’s equally or more exciting than the list of nominees, then rest assured it is the list of artistes rocking the big stage on GH Music’s Biggest Night! The Vodafone Ghana Music Awards has for the past years seen an array of great performances from various artistes both from Ghana and beyond. With names like the rain god, Samini, Efya, reining VGMA Artiste of the Year, Joe Mettle, Adina, King Promise, Kidi, Kuami Eugene, MzVee, Fancy Gadam, Kwesi Arthur, Sarkodie, Tiwa Savage from Nigeria, Nasty C from south Africa and a host of others all representing the various genres, the 19th Vodafone Ghana Music awards will definitely go down in history as one of the very best. Let us take a deeper look at the acts on the big stage, shall we? Undoubtedly one of Africa’s best live performers, the High-grade Family CEO, Emmanuel Dagaati Samini was tagged best performer at the just ended Vodafone Ghana Music Awards nominees jam in Cape Coast by almost everyone that was either live at the venue or caught the caboodle live on TV 3. Having hosted, performed and won many awards at the VGMA’s, he is definitely not new to the big stage and has promised to set it ablaze with his nominated and popular track “my own” and many others. From the new school and new age of GH Music, say hello to the lads topping the charts. The ‘Angela’ hitmaker Kuami Eugene, the ‘Odo’ hitmaker Kidi, ‘Grind Day’ hitmaker Kwesi Arthur, and the ladies’ man and ‘Selfish’ hitmaker, King Promise not forgetting the pride of the North and “total Cheat” hitmaker, Fancy Gadam all stepping up to give patrons the very best of their talent on the big stage. But the night isn’t all about the guys, the legends and the lads. Look out for that one act which organizers believe could be the biggest act of the night. Featuring celebrated and award winning songstresses Adina, MzVee, Efya, and Akosua Agyepong, it is definitely an act to look forward to! A major highlight of the Vodafone Ghana Music Awards Night that many look forward to is the performance of the reigning VGMA Artiste of the year; With awe inspiring performances from Stonebwoy, Sarkodie and many others in years past, will Joe Mettle, the first ever gospel artiste to win that category be able to command the angels to come down? One thing we know for sure is that the young talented singer who recently got a huge commendation from American singer and songwriter Bebe Winans as a great vocalist has never failed to impress on any stage. And with the possibility of making history yet again by becoming the very first artiste to win the coveted Artiste of the Year back to back in the reckoning, Joe Mettle certainly has more than enough reasons to prove his mettle. Topping the nominations yet again and cementing his unchallenged position as the most decorated Vodafone Ghana Music Awards Artiste of all time, Sarkodie, also known as King Sark to his Sark natives also takes the stage with his unique blend of hiphop and hiplife. Crowned the best rapper in Ghana, if not in Africa by many of his followers, Sarkodie is known for his energetic stage performances which always leave patrons wanting more of him. With hit tracks like, Overdose and light it up from his “The Highest” album and other hot singles like “Gboza” and “fa sor hor” all released in the year under review, the BET and many other awards winner, Sarkodie will definitely be a delight to watch!   The 19th Vodafone Ghana Music Awards, themed our music beyond borders will definitely not be complete without one or two international performances. The show has over the years seen some of the greatest acts from the African continent and even beyond grace its stage with some breathtaking performances; Jarule from the United States of America, Wizkid and PSquare from Nigeria, the late Hugh Masekela and HHP from South Africa and a lot more. Rocking the stage this year while battling for honours in the African Artiste of the Year category are Tiwa Savage from Nigeria and Nasty C from South Africa. Other nominees in the category this year are Davido, Olamide and Cassper Nyovest. Tickets to the biggest night of the year is selling now at Charterhouse, XMen and Nallem Stores at Accra/Osu/West Hills and Junction Malls or via Vodafone cash by texting *110# and selecting buy VGMA ticket for only GHc200 standard, GHc300 premium. For limited VVIP seats please call 0501290938. The 19th Vodafone Ghana Music Awards is supported by TV3, Dusk Capital, Nokia, Movenpick Ambassador Hotel, Mentos, DSTV, and GOTV and proudly sponsored by Vodafone! The future is exciting, ready?]]>

Highly talented vocalist Luta has announced his return to the music scene after a long hiatus as he prepares to relaunch his career with a new song.
END_OF_DOCUMENT_TOKEN_TO_BE_REPLACED

It looks like it’s a ‘year of homes’ for Ghanaian celebrities and the latest glimpse comes from the beautiful home is Broadcast Journalist Serwaa Amihere. END_OF_DOCUMENT_TOKEN_TO_BE_REPLACED

Ghanaian artist Amerado has announced the release of his debut career album titled God Is Never Asleep shortened as G.I.N.A. The announcement was made in the middle of his trending beef with fellow rapper LJ. END_OF_DOCUMENT_TOKEN_TO_BE_REPLACED

Global streaming giant Spotify is proud to announce that Sio has been selected to join the EQUAL Africa programme aimed at spotlighting female artists across the continent. END_OF_DOCUMENT_TOKEN_TO_BE_REPLACED