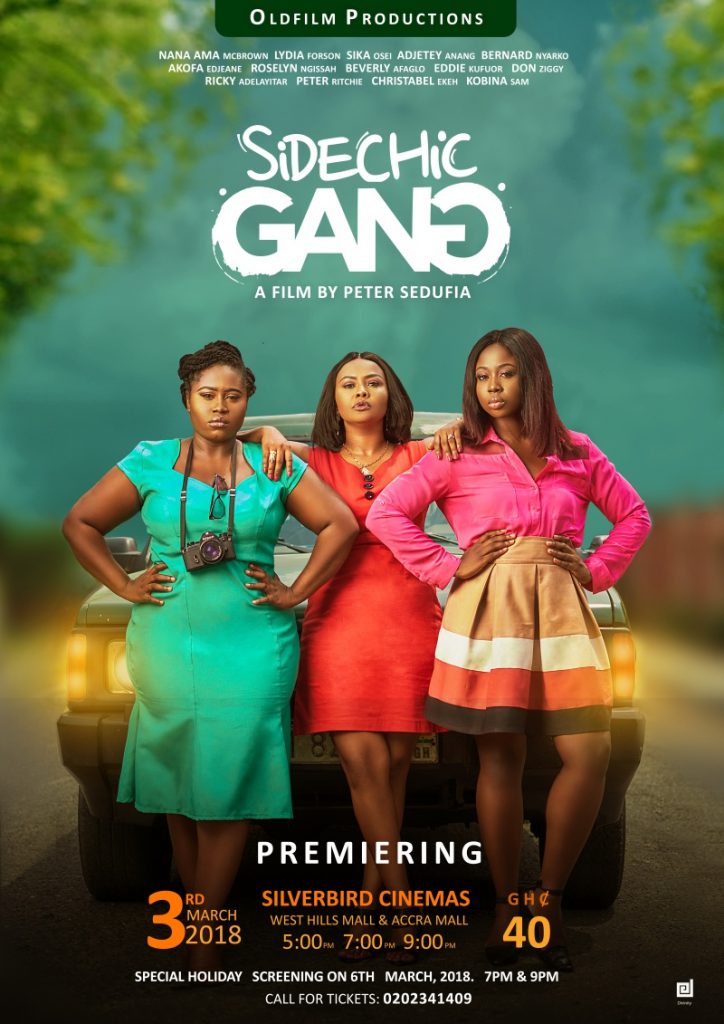 OldFilm Productions – the producers of ‘Keteke’, is set to premiere its new movie “SIDECHIC GANG” on Saturday 3rd March, 2018 at Silverbird Cinemas – Accra mall and West Hills mall.  The movie is directed by Peter Sedufia, and features celebrated actors such as Nana Ama McBrown, Lydia Forson, Sika Osei, Adjetey Anang, Bernard Nyarko, Eddie Kufuor, Akofa Edjeane, Roselyn Ngissah, Beverly Afaglo, Christabel Ekeh, Ricky Adelayitar, Don Ziggy, Peter Richie, Kobina Sam and lots more. The premiere will have three showings – 5pm, 7pm and 9pm. Red Carpet will be held at both centres, with the cast and crew gracing the West Hills mall first, for photos with the movie goers; and later join the Accra mall audience. On Tuesday 6th March, 2018, there will be a “Special Holiday Screening” of the movie at both Silverbird Cinemas venues to celebrate Ghana’s Independence Day. The time is 7pm and 9pm respectively. It will continue showing in the cinemas after the premiere for some time. The movie will further have regional screenings across the country for everyone’s turn. Synopsis: “Three female friends find out they can make fortunes from exposing cheating husbands and boyfriends after making tons of cash unexpectedly from reporting a cheating husband to the wife. They quit their ushering job to set up “Sidechic Gang” – an agency solely dedicated to clamping down the side chick menace. Their services are available to only women. After few exposè, their Sidechic Gang becomes popular, attracting traffic from victims of side chicks. This translates into more cash for them. The men in the town are unhappy with the sudden popularity of the gang. The Sidechic Gang’s biggest deal is yet to hit them. It comes from a filthy rich man who suspects his fiancée is cheating on him. He is aware the gang does not serve men, but, he is willing to pay anything it costs to justify his suspicion. The gang takes on the task. They know what this means for their bank account. Their greatest opposition, however, is the many aggrieved men who benefit from the services of side chicks, and would do anything to ensure they fail. Will the Sidechic Gang succeed in their quest or, the aggrieved men will?” Join us; don’t miss the fun! Call: 0202341409 for enquiries. See You In Cinemas on 3rd March!]]>