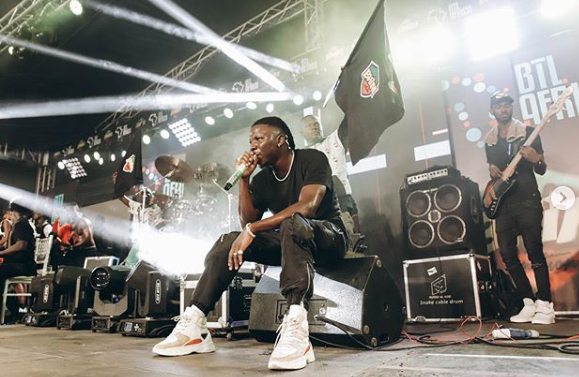 elebrated Ghanaian Afrobeats and Reggae/Dancehall artist, Stonebwoy as part of his media engagements during his USA Tour had a sit down interview with Odessa on her much hyped up online show “Reasoning with ODESSA” hosted by O-Access Jamaica, a Jamaican and Caribbean Pop-Culture Media Outfit with focus on African Culture.

The interview session which highlighted more on Stonebwoy’s forthcoming album “Anloga Junction” saw the Ghanaian Afrobeats/Dancehall star pointing out key influence on his album and also confirmed Jamaican Dancehall Star, Jahmiel and American Singer, Keri Hilson are on the album.

Stonebwoy again emphasized on the key instrumentations of his album which are Afrobeats and Dancehall. He is delighted to be one of the young pioneers to have pushed the agenda for the global market to accept the musical genre.

The album which had major production credits from the likes of Dre, Spanker and other major Ghanaian Music Producers (iPappi, Mix Master Garzy and more) is said to highlight more on Stonebwoy’s life experience not excluding his creative journey. “Anloga Junction” by Stonebwoy is on Pre-Order now and is scheduled for official release on April 24, 2020. He is currently promoting two singles “Good Morning” and “African Party” off the album.

Kindly tap the link below to listen to Stonebwoy’s full interview with ODESSA on “Reasoning with ODESSA”;

On Tuesday, August 2, Netflix hosted a “See What’s Next Africa” content showcase in Lagos, Nigeria, to spotlight its increased investment in Africa’s rich storytelling history through exciting new projects in a wide range of genres and formats that will be available in 190 countries. END_OF_DOCUMENT_TOKEN_TO_BE_REPLACED

Religious fanaticism and extremism have plunged countries into chaos and conflict the world over. Countries in West Africa that have been affected include Nigeria, Burkina Faso and Mali among others. END_OF_DOCUMENT_TOKEN_TO_BE_REPLACED

The meteoric rise of the African entertainment industry into a reckoning force within the global entertainment landscape has been accentuated by MTV Base’s tireless commitment to expanding the acceptance of African music, lifestyle, and entertainment across the globe. Over the last two decades, and in recent times, it has affirmed this commitment with various innovative campaigns, the most recent of which is its Musicology series.   END_OF_DOCUMENT_TOKEN_TO_BE_REPLACED