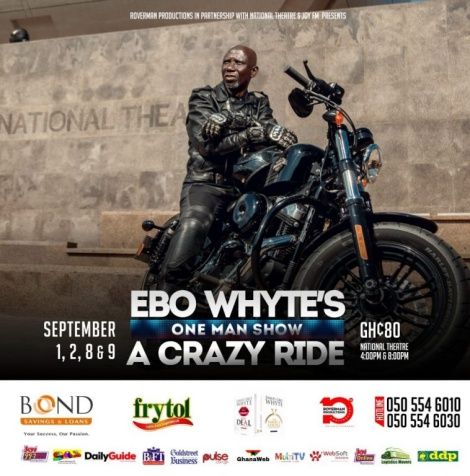 Uncle Ebo Whyte thrills patrons with his one man show[/caption] From reading Statistics at the University of Ghana to writing plays, James  Ebo Whyte has proven to us time without number that he is an outstanding playwright and performer; and his one man show over the weekend has all the proof. The renowned playwright, popularly known as Uncle Ebo Whyte, over the weekend took to the stage to enact his spectacular one-man stage performance titled ‘A Crazy Ride’. Before his performance at the National Theatre, the Roverman Production CEO promised fans they were in for a treat and that was exactly what they got. He said, “I will do something I have never done before to honor and thank my God and to celebrate life”.

I’ve put my heart into the show and I know you’ll love it. Join me on A Crazy Ride. #EboWhyteCrazyRide

//www.instagram.com/embed.js The show was filled with sensational performances from different angles of his life. He performed various songs including  King Promise’s ‘CCTV’, Kuami Eugene’s ‘Wish me well’ and Lucky Dube’s ‘Back to My Roots’ amongst others. He also revealed that there were several prophecies concerning his life which indicated a possible death. He however made  a covenant with God to spare his life and by grace he survived his 64th birthday. Patrons went hysterical when the 64 years old Playwright decided to arm press on stage. He ended the show with a spectacular song performance from Ryan Shupe and the RubberBand’s “DREAM BIG” song.]]>
Up Next

Ghanaian Pizza brand, Pizza Inn has opened a new branch in East-Legon and has FREE pizza pies and more to share this christmas season. END_OF_DOCUMENT_TOKEN_TO_BE_REPLACED

Dancehall act, Stonebwoy has hinted that his legal team is taking serious action against his former signee Kelvynboy for comments he made after he was attacked in Ashiaman recently. END_OF_DOCUMENT_TOKEN_TO_BE_REPLACED

Internet sensation and “King of Gh Rap”, AY Poyoyo has caught the international audience with his unique style of music. END_OF_DOCUMENT_TOKEN_TO_BE_REPLACED

Canadian singer, Justin Bieber has reacted to the sexual assault allegation made against him by a Twitter user identified simply as “Danielle” with evidence. END_OF_DOCUMENT_TOKEN_TO_BE_REPLACED