Ghanaian comedian, Benson Nana Yaw Oduro Boateng, popularly known as Funny Face, has been sued by a lady in the United States of America.

The lady claimed Funny Face owes her about $53,105.53 and wants the court to declare that Funny Face defrauded her by “false pretences.”

The writ alleged that Funny Face took monies from the woman, Mary Ama Boansi, upon the promise that he would marry her but failed to pay back when the relationship turned sour.

According to the writ, the Plaintiff (Mary Ama Boansi) met the Defendant (Funny Face) sometime in June 2016 and became friends with him.

It further stated that Funny Face later fell in love with the woman and proposed marriage to her.

In view of the love she had for him, she allegedly footed a lot of bills for Funny Face for his movie projects.

Even though Funny Face according to the writ promised to pay back the money, he has not yet done that.

The Plaintiff, is therefore, asking the court to among other things direct Funny Face to pay her $53,105.53 or its Ghana cedi equivalent (plus interest at bank rate) being the total sum of money she allegedly gave the comedian.

She also wants the court to order Funny Face to pay interest on the said amount.

Popularly known in the ‘Chorkor Trotro’ and ‘Cow and Chicken’ television series, Funny Face is currently out with another television production called ‘Kasoa Trotro.’

See copies of the writ below: 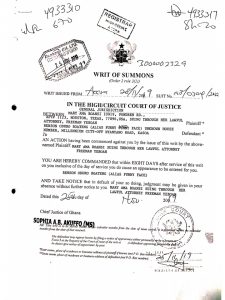 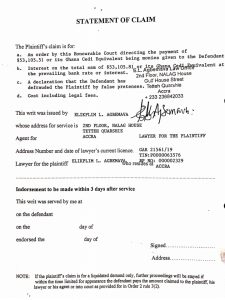 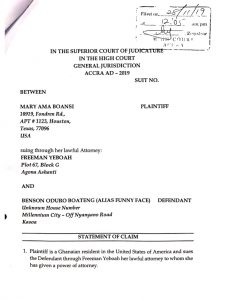 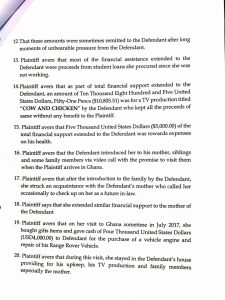 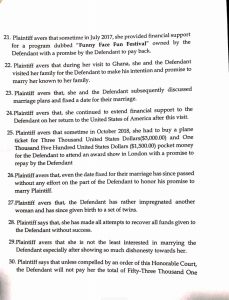 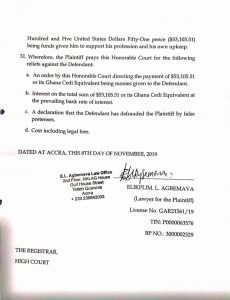 Funny face prefers to keep his woman out of public eye, here’s why

Related Topics:Funny Face
Up Next

I am not bothered about critics, I will forever protect Ebony’s legacy- Father

Bose Ogulu has told her son Burna Boy to “tone down the madness” as she celebrated his birthday. END_OF_DOCUMENT_TOKEN_TO_BE_REPLACED

The Hewale Lala (Song Of strength) hit maker Perez Musik gets ready to have his first-ever major concert. END_OF_DOCUMENT_TOKEN_TO_BE_REPLACED

Kofi Sonny, CEO of 610Music, a direct representative for Universal Music Group in Africa, unveiled two of his newly signed artistes to the world over the weekend. The event pulled in dignitaries from all over the globe to witness what many have dubbed “the birth of greatness.” END_OF_DOCUMENT_TOKEN_TO_BE_REPLACED