Politician Victoria Hamah has threatened  to take legal action against musician and  controversial radio personality Blakk Rasta over a comment he shared on social media.

It all started when Franklin Cudjoe who is the President for Think Tank Imani Ghana posted on his timeline asking people the quickest way to make $1 million within a short time.

But Blakk Rasta as a way of providing help to Franklin Cudjoe suggested that he should contact Victoria Hamah.

This comment from Blakk Rasta didn’t go down well with Victoria Hamah who immediately replied the Reggae artiste.

According to her, the musician should delete his comment or she would sue him adding that she has had all the negative comments he has made about her in the past but she chose to ignore.

Her response reads: “Remove this nonsense this minute otherwise I will see your stupid self in court. I have heard the many nonsense comments you have made about me in the past and I only chose to ignore your ignorance.”

It is believed that Blakk Rasta’s comment was based on a 2013 eaked audio of Victoria Hamah who was then the deputy minister of communication allegedly saying that she won’t quit politics until she’s made $1 million. 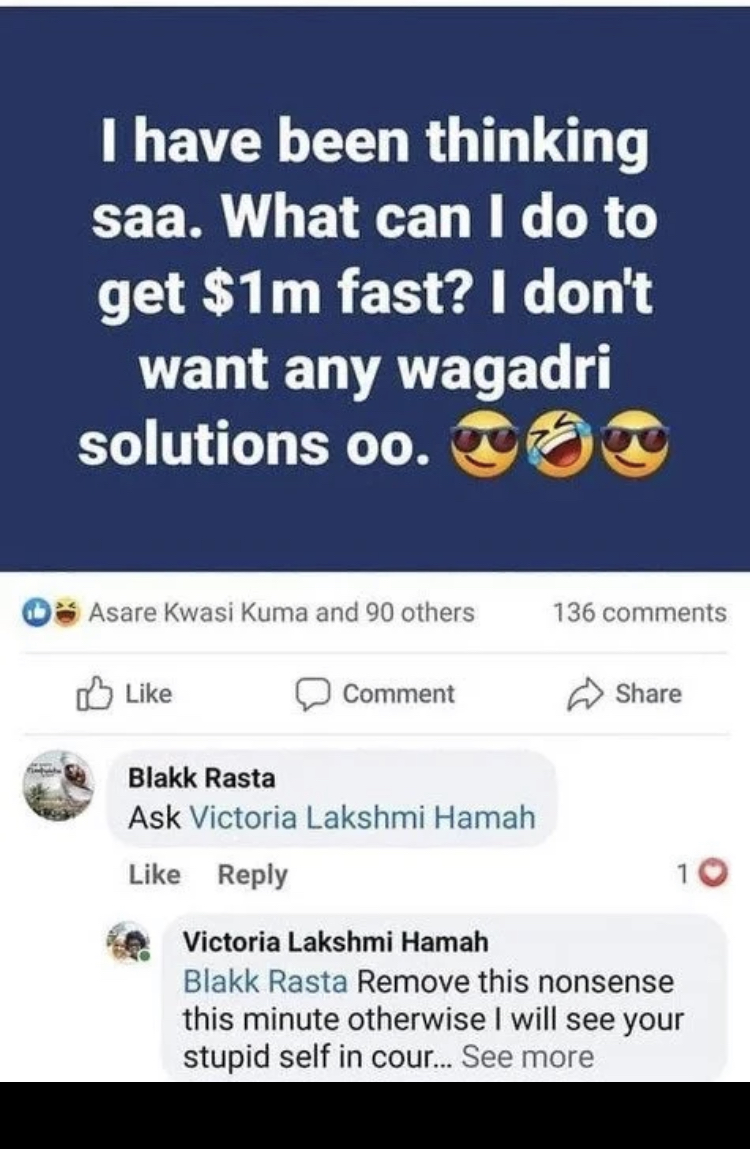 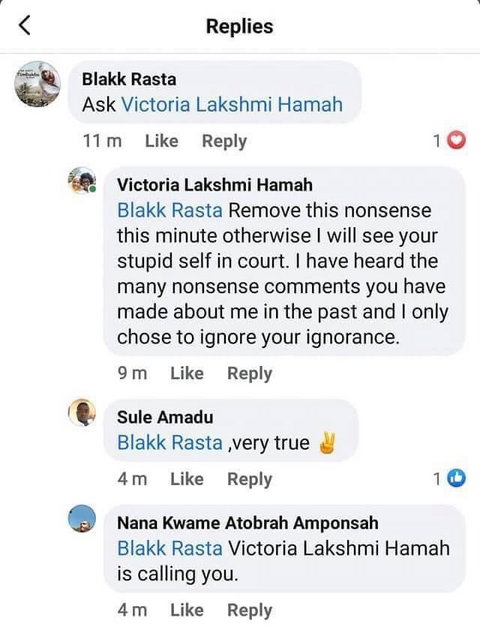 Ghana DJ Awards to hold workshop for DJs on November 20

Ghanaian Reggae and Dancehall artist, Stonebwoy has been captured in a studio with American singer, Jordin Sparks following their recent meeting in Los Angeles. END_OF_DOCUMENT_TOKEN_TO_BE_REPLACED

A Lagos State High Court, Southwest Nigeria has awarded N5m damages against a singer, Ikuforijimi Abdulrahman, aka Oxlade, over a leaked explicit sex tape with a woman on a social media app, Snapchat. END_OF_DOCUMENT_TOKEN_TO_BE_REPLACED

Ghanaian rapper, Kwaw Kese has recounted his contribution to the success of Stonebwoy’s career. END_OF_DOCUMENT_TOKEN_TO_BE_REPLACED

Ghanaian Afropop and R&b singer, Camidoh has stated that he dropped an EP instead of an album to further solidify his brand some more. END_OF_DOCUMENT_TOKEN_TO_BE_REPLACED

Ghanaian Radio/Television Personality, Deloris Frimpong Manso, popularly known as Delay, has revealed that she has been blocked on Twitter by her colleague Abeiku Santaana. END_OF_DOCUMENT_TOKEN_TO_BE_REPLACED