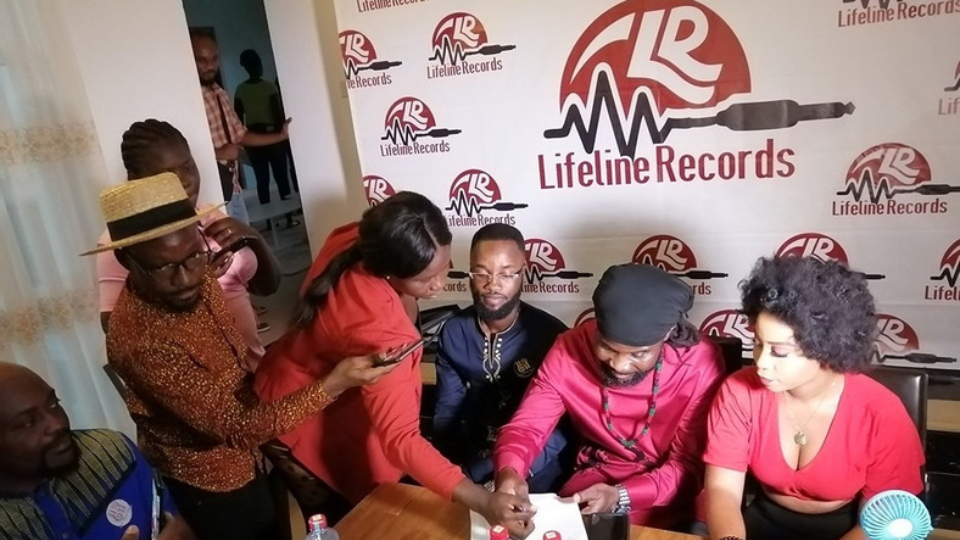 The 5-year contract was signed at a press briefing held at Nautical Beach Front, Nungua-Accra.

The new deal will see LifeLine Records handle the management, distribution, promotion, and marketing of Abochi and Dede Supa’s works.

Speaking at the press unveiling, Mr Yoofi Boham, CEO of LifeLine Records said management will do it best to push the two brands to the top.

He promised that the management team will focus on providing all resources and services needed so the two signed artists can focus on their music.

“My management team is poised to make Abochi and Dede Supa the star that they are. We’ve done it for some popular Ghanaian artistes so we’re ready to do more for our newly signed artistes to get to the top. We believe that with the support of all we can move Ghana music forward,” CEO stated

Abochi, on his side, thanked the management and all for supporting his music career. He promised to work hard so that LifeLine Records does not get disappointed.

“I’ve been waiting for a day like this because this deal is really important to me. People are going to see me in a light that has never seen before,” he said

Dede Supa expressed her excitement about the new deal signed. She promised management, media and fans to expect the best from her.

The newly signed LifeLine Records artistes also out-doored their new single under their management, titled “My Bestie” by Abochi and “Over” by Dede Supa.

Watch highlights from the event below.

Watch: Elikem Kumordzie reveals why he shutdown his flagship store in East Legon

Eyinatayo Iluyomade, a 19-year-old Lagos-based comedian, has been arrested and charged to court for saying an expensive joke. END_OF_DOCUMENT_TOKEN_TO_BE_REPLACED

Despite the public not being privy to the romantic life of Ghanaian actress Salma Mumin, she has revealed her heart has been broken several times. END_OF_DOCUMENT_TOKEN_TO_BE_REPLACED

The Lioness of Africa, Wiyaala and the King of African Dancehall, Shatta Wale on Saturday, August 13, 2022, rocked the Summer Stage in New York City. END_OF_DOCUMENT_TOKEN_TO_BE_REPLACED

Legendary Ghanaian rapper, Tinny has descended heavily on Stonebwoy and Mercury Quaye over some comments they had made on radio concerning the confiscation of his car. END_OF_DOCUMENT_TOKEN_TO_BE_REPLACED

Ghanaian music artist and music connect, Smallgod has stated that despite having over 15 years experience in the music scene, he worked hard to get all the love he’s getting from big names in the music scene. END_OF_DOCUMENT_TOKEN_TO_BE_REPLACED