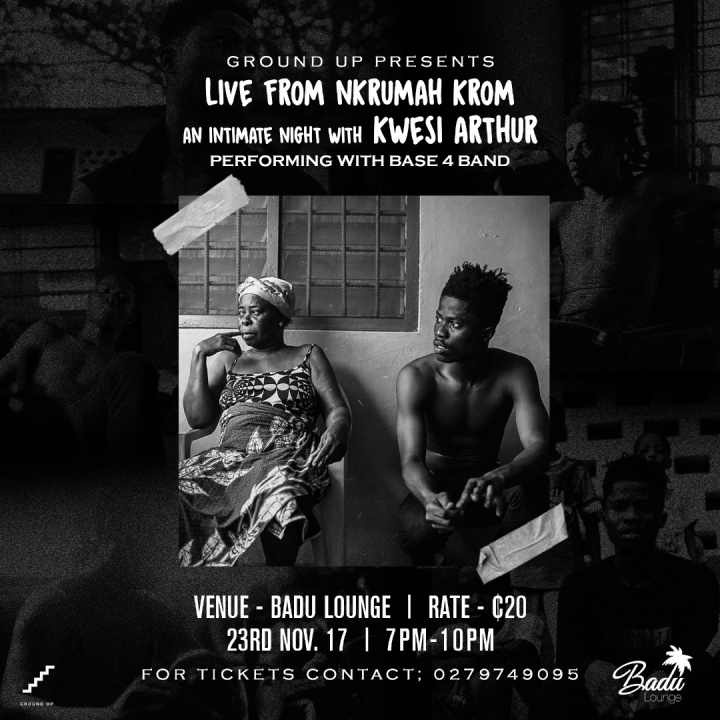 Upcoming Ghanaian rapper and singer, Kwesi Arthur known for Grind Day, will be performing songs from his debut EP, Live From Nkrumah Krom on November 23 at Badu Lounge. Since the release of his EP, not only has Kwesi Arthur and his music made the rounds from radio station to radio station, but the young artist scored his first major gig at the just-ended Ghana Meets Naija concert when he was brought on stage by award-winning Ghanaian rapper, Manifest. Kwesi has received well-deserved recognition from some of Ghana’s biggest artists, including Sarkodie and Efya, as well as from industry pundits, some of whom have gone ahead to write rave reviews about his music. He was also recently featured on a song, All Of You, with hip-hop artist, Dex Kwasi. It all started for Kwesi Arthur when he began sharing his mashups and studio session videos online. These videos fast became popular, almost always going viral, and this has earned him an unprecedented cult following that grows larger every day. In anticipation of his first live show, Kwesi Arthur drops his new visuals 8pm in Tema, which was produced by Tabil. https://www.youtube.com/watch?v=pDhqpPO61b0]]>

Black Stars Captain, Andre Ayew has spoken up after his penalty miss at the FIFA 2022 World Cup Tournament. END_OF_DOCUMENT_TOKEN_TO_BE_REPLACED

Ghanaian actor and entrepreneur, John Dumelo has requested for the funds set aside for the Black Stars, had they qualified to the round of 16 in the FIFA 2022 World Cup, to be used to purchase desks for school kids. END_OF_DOCUMENT_TOKEN_TO_BE_REPLACED