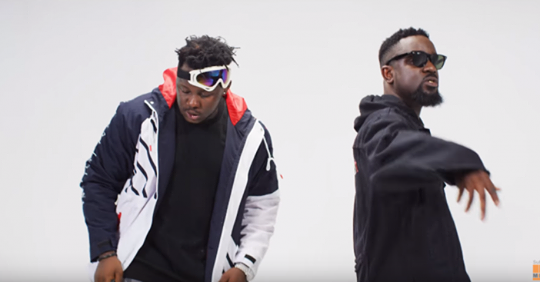 In an interview with 4Syte TV, the “LUCKY” hitmaker said every rapper can boast to be the best, hence it’s not a big deal for Medikal to say so.

“He genuinely feels that and he has to be able to say what he feels. He expressed it. He wasn’t disrespecting anyone. When I am rapping and I say I am the best, I don’t think about Obrafour even though [he is champion.]”

“I don’t think he’s trying to go at anyone but as a rapper, you are supposed to feel like that,” Sarkodie added

@sarkodie respond to @amgmedikal tweet “4 years ago i saved Ghanaian Rap Music from dying” Tune in 1:00pm today on your No.1 Urban Entertainment and music channel for more.

Ghanaian rapper, Okyeame Kwame has opined that the new crop of rappers in the industry are far “better” than him and others who have been in the game for two decades. END_OF_DOCUMENT_TOKEN_TO_BE_REPLACED

Ghanaian rapper, Sarkodie may be gearing up to speak against the governance of the nation by the ruling New Patriotic Party (NPP). END_OF_DOCUMENT_TOKEN_TO_BE_REPLACED

Ghana’s social media has been buzzing after a video showing a young  Ghanaian in police escort to go and buy a burger went viral! END_OF_DOCUMENT_TOKEN_TO_BE_REPLACED

Broadcast Journalist at Metro TV, Bridget Otoo has come after employers who fail to pay their workers, yet live lavishly. END_OF_DOCUMENT_TOKEN_TO_BE_REPLACED