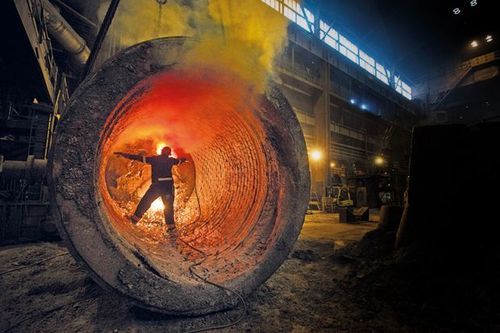 Forging refers to the industrial process of heating and deforming, and then finishing metal pieces. This manufacturing process involves shaping metals through heat application along with mechanical processes like pressing, hammering, and rolling, during which compressive forces are delivered to the metal via the use of a die or a hammer.

There are different types of metal forging processes, but these types are all characterized based on the temperature applied during forging – forging can be hot, warm, or cold.

Steel forging is one of the most common forged metals. During the forging process, the original steel metal is deformed and shaped into the desired geometric shape, giving the metal a higher strength and fatigue resistance.

Forging is one of the oldest metal manufacturing processes, and it has been practiced by metalsmiths for thousands of years in different parts of the world.

In the Bronze Age, copper and bronze were the most commonly forged metals. According to https://www.qcforge.com/forging-copper, however, with the human species learning new techniques for controlling temperature during metal forging, iron smelting was discovered, and for the longest time, iron was the primary metal forged.

Then came the Industrial Revolution, which paved the way and opened up forging in more efficient setups. Mass production of metals and metal-items through forging became popular then. The industrial revolution evolved forging processes and gave birth to some of the biggest breakthroughs in science, the electrical and mechanical world.

Today, forging is the leading process that leads to the customization of metals into varied shapes and sizes.

During forging, there is the realignment of the metal grains, and the effects of the heat and the resultant deformation make for the resultant forgings that withstand extreme pressure conditions while maintaining their structural integrity under extreme stress.

Besides temperature, forging depends on the tools used with anvils and the die-press being the most common metal forging tools. The latter (die press) involves enclosing a metallic piece in the die press and squeezing the metal to form the desired shape or impression.

In this section, we look at some of the top metal forging methods, briefly. They include:

This method of forging involves the actual dropping of a hammer onto a piece of metal, molding it into the die’s (the die is the surface in contact with the metal to be forged) shape. Drop forging can be open-die or closed-die.

This method of forging involves the use of two semi-cylindrical or cylindrical rolls in deforming a metal to either a round shape or into flat bar stock. The process reduces the thickness of the metal while increasing the length. Next, a heated bar is passed between the formed rolls. Rolling continues until the achievement of the desired shape.

Press forging, as the name implies, involves the use of a slow, but continuous force, rather than the excess impact of drop-hammer forging. In this case, there is a slow ram that travels slowly, resulting in a deeper impact of deformation and a uniform effect of forging.

The metal manufacturing process used to increase a metal’s diameter through the compression of the metal’s length. In upset forging, a specialized high-speed machine, the crank press, is used.

The other types of forging include automatic hot forging, precision forging, and isothermal forging.

Sofas that match your room and lifestyle