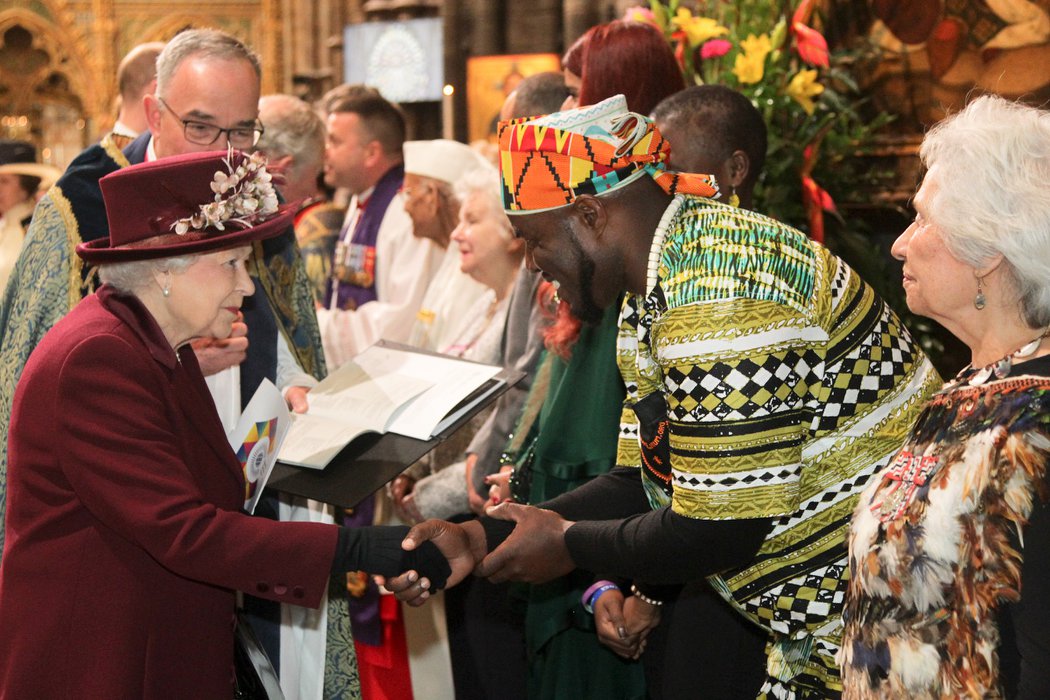 He is the founder of One-Drum, UK’s leading service provider of authentic interactive African drumming workshops. One-drum is a collaborative ensemble of professional Performers, artists and teachers from diverse backgrounds, committed to creating inclusive, engaging work that uses cultural expression as a catalyst to change perceptions.

In an interview with Ameyaw TV, Abass described performing for the royal family as one of his favorite career highlights. “I always say I don’t know a lot, I am not the best drummer but one thing I know is that I do what I do well.  When they were looking for an African drummer, they found me online and they called me to say they wanted me to do an event for the royal family. And I said yes, I would love to do it.  My first royal family event was the Golden Jubilee of Queen Elizabeth.  I did that with Ajido, and we did that in the palace.”

He has since had other opportunities to perform for the Royal Family as a solo act.

Abass Dodoo was born in Nsawam, into a family of drummers, dancers and healers. His maternal uncle Mustapha Tettey Addy, a master drummer, anthropologist and researcher in the field of traditional music and dance in Ghana mentored him.

In 1982 Abass joined the Academy of Music and Arts (AAMA) where he developed his unique skill and technique from a very young age. The AAMA hotel and drum center became a major focus in Ghana for international visitors, musicians and students. AAMA was the first of what has become a large number of private drum and dance centers that are helping to boost Ghanaian Tourism,  leading Abass Dodoo to establish his own African drumming and dance academy call AKROWA in 1989.

Between 1990 and 1998, Abass, along with his fellow drummers, were featured on six albums on the German Weltwunder label, including the important Royal Drums of Ghana.  He played at various festivals around the globe, such as Panafest, Salona Festival in Croatia, Africa Festival in Germany and many others including WOMAD (World Music and Dance).

Between 1998 and 2004 Abass was part of the Adzido Dance Ensemble based in London as the lead African drummer, choreographer, music arranger and teacher working alongside George Dzikunu, Geraldine Connor, Tunde Jegede, Urban Bush Women, Zenzi Mbuli and the Pan-African Orchestra.

Abass later collaborated on a number of productions including Disney Kids Awards (2001), Lion King (2005), SEWA Education and BBC’s Strictly African Dance. In 2007 Abass founded One-Drum. He has been involved in many innovative performances, recordings, TV appearances and educational projects, and in 2012 he performed for a season in the Royal Shakespeare Company production of Julius Caesar.

In 2014 Abass recorded an album titled WHY and in 2015 he was invited to play on a Van Morrison album titled DUETS. He has also worked with the Cream drummer Ginger Baker, touring Jazz venues and festivals around the globe with the Ginger Baker Jazz Confusion.

Dodoo is currently visiting Ghana, where he is exploring opportunities in bringing up future performers like himself. “I am promoting Ghana a lot abroad but Ghana doesn’t know me. So I am in Ghana to introduce myself and also help the young people who want to do Ghanaian drumming and dancing. I want to encourage and motivate them to know that this is a job and they have to take it seriously. It is very important that they keep it going or we will lose it all in the future.  I have been moving from one group to the other; talking to them and giving them advice and support. The future for me is to have a drumming school or some sort of academy, where everyone can come and learn the culture.”