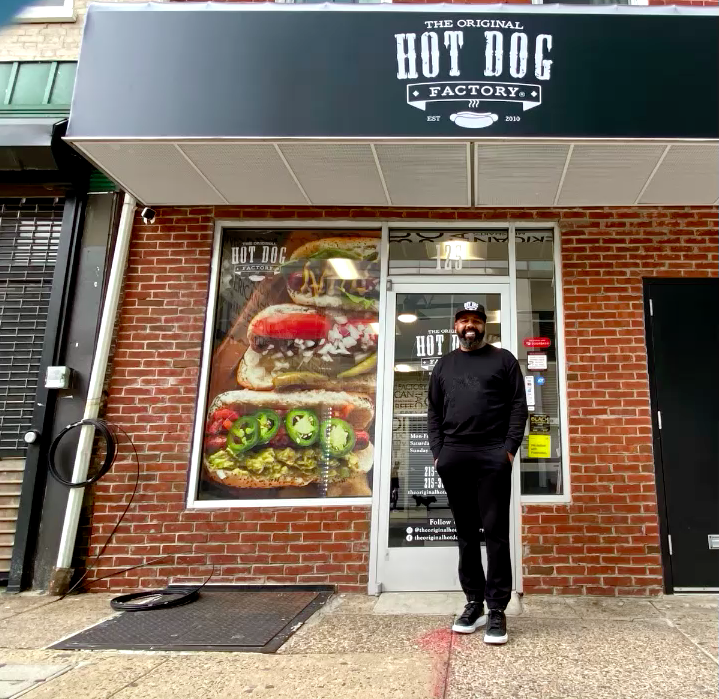 According to reports some 41% of black-owned businesses across the US were forced to close during the Covid-19 pandemic compared to 17% of white-owned businesses. Most of those impacted were black-owned bars and restaurants but Aaron Anderson, franchise owner of four The Original Hot Dog Factory restaurants in Philadelphia is not only driven to thrive during these difficult times but also motivate others to do the same with his story!

The concept for The Original Hot Dog Factory originated in in Atlanta Georgia, where currently there are two stores. Over the last seven months, Anderson has opened four of them in Philadelphia.  He is expected to open two more franchises, another in Philadelphia and one in Brooklyn, NY.

In an interview with Ameyaw TV, Anderson talked about the challenges of setting up these restaurants amidst the coronavirus pandemic.  “The nature of the business changed drastically, we were anticipating to do triple of what we are doing now. But instead, we had to refocus on delivery and take-outs, which represent about 40% overall gross of the restaurants.”

“Opening during the pandemic was challenging, especially trying to find good staff.  I had all of these locations before COVID. One of the locations was in a food hall, where tourists would come to but now there are no tourists. So we opened up but again, we changed the narrative and spent more money on the marketing aspect to promote that we are open for takeout and delivery. It has been difficult to operate in a pandemic.”

Anderson credits some of his success these past few months to catering to first responders and essential workers, and making sure all of his employees and take-out customers are in a safe environment to prevent the spread of Covid-19, with social distancing, face masks and the installation of self-service kiosks.

On what it means to him to be able to do all this as a black-business owner in America, he commented: “It is still surreal a little bit because I did all this in some six months, but most importantly, I am working on building a legacy and being an example for my children, friends, and anybody that knows me or I’m associated with. It is a surreal feeling but most importantly I did it to make sure that I was in a position to motivate other African Americans to get them to see that, we are in America, there are opportunities. There are going to be hurdles and trials but you can do anything you want to do.”

Anderson also revealed that his newest endeavor would open this fall. “Now I am in the process of building my own franchise, which is called Steakhouse 1635. It is going to be a mesentery modern steakhouse, where we will have some vegan options as well.”

This will be the blueprint for a new franchise of steakhouses to be opened in major cities across the United States and abroad.

Born and raised in the tough inner-city of Philadelphia, PA, Anderson credits his mother, a single parent of five, with his unyielding strength, discipline, humility, passion and persistent need to be of service to those in need. Anderson’s foray into being a business owner ̶ the very first in his family ̶ started with the launch of his very own screen-printing company in 2009, Union Printing.

The idea to start this company culminated while working as an assistant to a top record company executive at Sony in New York City. Anderson realized a need to provide quality merchandise for an affordable price after seeing an invoice at work and convinced his bosses that he could not only meet the demand for the record label’s printing but most importantly, for a far better price. As the saying goes, the rest is history. Anderson not only surpassed expectations at Sony, but Union Printing established itself as a leader in the industry and is still hugely successful more than a decade later.

Anderson’s success with Union Printing provided not only financial stability but the necessary experience needed to embark on another one of his passions, opening his first restaurant franchise in March of this year, which he did without needing any loans. His immediate success within The Original Hot Dog Factory organization has led to him becoming an area representative, trainer for new franchisees, and obtaining a percentage of company ownership.

Aaron Anderson’s keen interest in technology prompted him to become an investor in the pharmaceutical application QwikScript, and flight simulator application Flype. These strategic investments contribute to his growing financial portfolio and further strengthen his parent company Axxeum LLC, which was formed in 2018. In line with his desire to give back to the community, he became a member of Philadelphia’s Chamber of Commerce and The Pyramid Club.

His future plans include having ownership in a professional sports organization and to become an elected official in his home state of Pennsylvania. An inspirational memoir about his life is also in the works to provide invaluable information and encouragement to others who desire to follow in his footsteps.

How Can Retailers Drive More Sales with Cross-Selling?