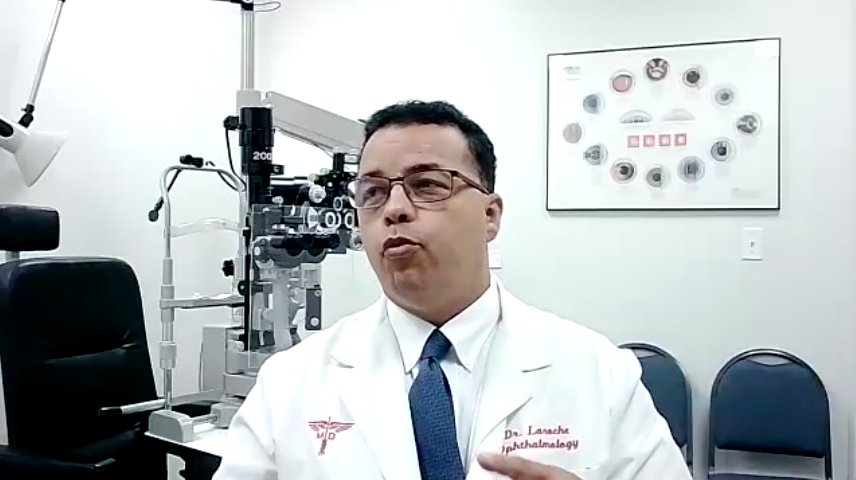 Dr. Daniel Laroche, a New York-based glaucoma specialist is working on the front lines to educate others about prevention of COVID-19, while also spreading awareness about the inequalities in health care among Black and Brown people.

“During the coronavirus pandemic, people should guard their eyes with glasses or face shields to protect their eyes from virus infection. Wash hands frequently, follow good contact lens hygiene and avoid rubbing or touching our mouth, nose, and especially our eyes,” says Dr. Daniel Laroche, Director of Glaucoma Services and President of Advanced Eyecare of New York. He is also affiliated with the New York Eye and Ear Infirmary of Mount Sinai, Island Eye Surgical Center, and New York University.

The COVID-19 pandemic has also changed the way people visit their doctors. For patients over 60, Dr. Laroche advises it’s better to stay home and do telehealth over the phone or video consultation until the pandemic flattens.

“ One of the things that we noticed during the pandemic is that many of the seniors do not know how to use the smart phone. So it is very important to get the kids and the family at this time to teach them how to use it, teach them how to do video conferencing with their doctor. There are many ailments that you can stay home and the doctor can prescribe medication for you.”

According to Dr. Laroche these disparities have existed for hundreds of years in America. “We have a system in America that was really built to create these disparities. If you go back to 1790 where the only people who could be citizens of the US were the white citizens according to the naturalization act by law. Blacks were not allowed to be citizens, they were not allowed to own lands, they were not allowed access to education.  If you go back, that was the foundation of the country. Although we have made a lot of progress, we have not really dealt with the institutional issues that were created under the system of white supremacy.”

He adds that impact of COVID-19 has been more on people of colour, also because of the disparities in employment, blacks tend to make up more of the essential workers like the people that work in the supermarkets, bus drivers, train conductors and things of that nature so they are more exposed to the virus.

Dr. Laroche highlighted several measures to help address and combat the issue of disparities in health care among people of colour.  These include: Increasing the number of Black and Afro-Latino physicians worldwide; Implementing universal healthcare; Increasing wealth and education which produces better health; Providing a living income stipend for poor people to access food and reduce malnutrition; and Eliminating racism to reduce stress.

Other measures include: Identifying white supremacist organizations as terrorist groups; Recommend all corporations have people of color in the top management and leadership positions; Eliminating sole reliance on standardized testing as the criteria to be used at entry to magnet schools; Provide more funding to reduce homelessness and for mental health; and The government should also require medical school, research and hospital funding to diversify and benefit people of colour.

Related Topics:Covid-19Dr. Daniel Laroche
Up Next