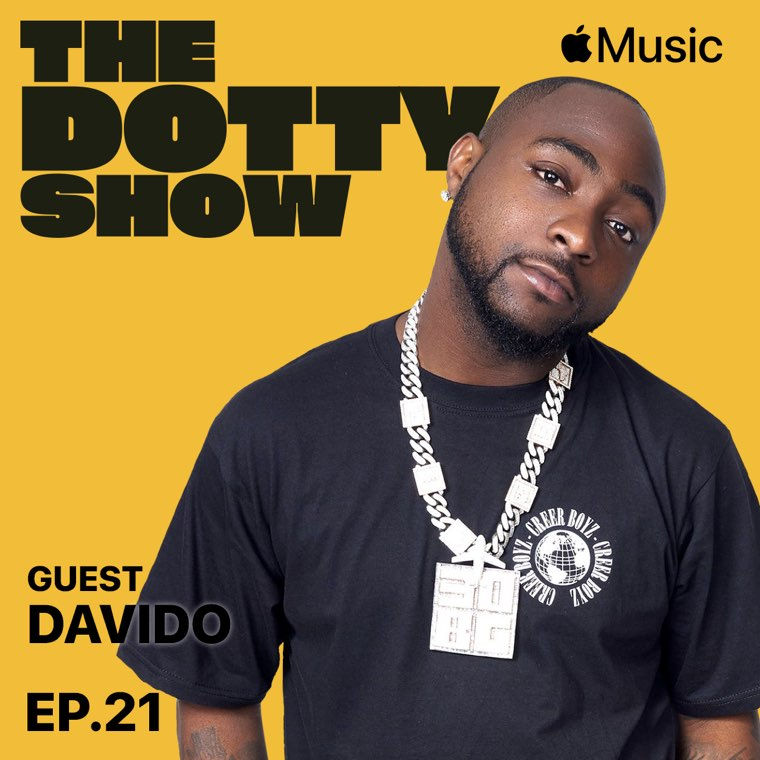 Dotty chats to Davido on The Dotty Show on Apple Music 1. In the interview he explains the pitfalls of flying economy, his joy at finally securing his Instagram handle, going to school with Oritse Williams of JLS and why he’s not prepared to pay for collaborations – even if Stevie Wonder asked!
Please find quotes from the interview below. Feel free to use and credit to ‘The Dotty Show’ on Apple Music 1. Listen to the show in full on demand at apple.co/_Dotty.

Davido On Going To School with Oritse from JLS
I went to school in Nigeria with one of the JLS members. His room was right next to me, the dude in JLS. Oritsé. Ask him. That was my school dad. All of that. We still talk today. It’s crazy. He was next door to me. He was older than me. He was three classes ahead of me. But he was right next to me. He was my mentor at school … I remember going to the Tesco. I remember going to the Tesco, and I see my boy on a condom. I’m like, “Yo, Oritsé’s on a condom, bro.” Crazy bro.

Davido Says A Fellow Traveller Offered To Switch Seats With Him When He Saw Him in Economy
Man, I flew in economy last year because I got stuck. I took a jet to Mykonos, I got stuck. Something happened. I had to come back to London. I had to, you know what I’m saying? I went economy. It was okay. There was Wi-Fi on the plane. I was cool… [Passengers were] asking questions, “What happened? Where’s the plane?” Blah blah. And I’m just, I’m busy as it is to explain each time. But after a while it was just cool. I’m here… It was actually funny because they was cracking jokes. I was even laughing. Two people started arguing because the lady was like, “Um,” some dude was talking to me and the lady was like, “Oh, can you keep it down?” The dude is like, “If he wants quiet, if he wants peace and quiet, go to the first class. This is economy.” But it was just, it was fun though. And then even one time a fan asked me to switch seats. I was like, “Nah, come on.”’… He was in business class.

Davido On Finally Getting His Name For His Instagram Handle
Yo, it was eight years, man. Eight years of begging, man. But hey man, guess what? I didn’t have to use no money or none of that. Even though over the eight years, I used to tell the dude like, “Yo, I’ll pay you for the name,” but the dude was Brazilian. He didn’t even understand English. He just used to read it and to be like… It was crazy…This time last week I just searched, and I didn’t see him anymore. I called Instagram, and I got the name.

Davido On What He Would Do If Stevie Wonder Asked For Money For A Collaboration
Okay. Listen, let me tell you. With Stevie, okay, Stevie Wonder’s a legend, of course. If he met me, he wouldn’t do it. He would want to do it off the jump. But with labels, there’s always maybe a little fee, like some lawyer fee, lawyer fees and stuff like that to get the paperwork done. But outside of that, nah, we not doing none of that… Yo, right now, I’m charging American artists for songs. I am. I’m charging American artists for songs right now. Two American artists done pay me $70,000 for a verse.

Davido On Coming From a Wealthy Background and Not Paying For Collaborations
I mean, at a point in my career I believed that, “Let’s just give him money. Let’s just give him money. Let’s just do the record.” But after a while it just never came into play anymore. That’s why I said the relationship with this, I’ll have a relationship with this artist, it’s very important. It’s past the music. Even apart from the music, having a relationship with them is very important so they don’t bring things like this last minute, “Oh, money.” A lot of them know I do it. A lot of them know my situation. I wouldn’t lie to you. I come from a background of money, but now, I mean, I make the best music ever. It’s like, “Let’s make music. That’s why we’re here.” Later on when we make money from the music, I might be like, “Hey man, I just made $200,000 from that song. I don’t really need it. Yo, you can have it.” You know what I’m saying?