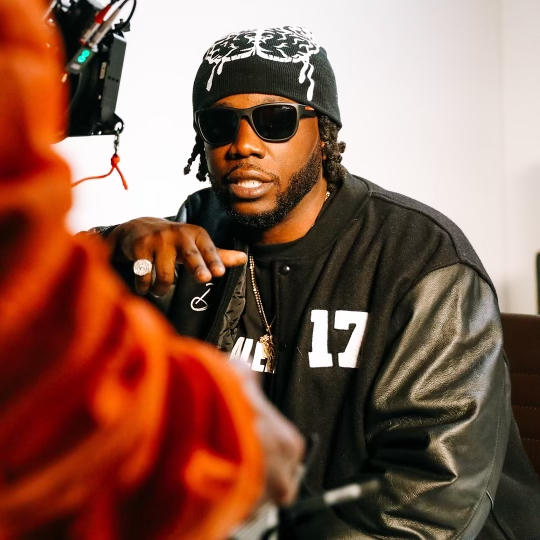 The bolstering track features a punchy trio of verses from Cudi, Denzel Curry & JID over an ethereal and psychedelic instrumental courtesy of Dot da Genius. The Lyrical Lemonade visual features a mirage of animated shots including Cudi wrapped in a Louis Vuitton space suit performing in a mirror-laced room, Denzel Curry & JID rapping in a black & white wonderland, and Dot da Genius running the whole show in an impressive control room. The visual also marks the first collaboration between Lyrical Lemonade and Kid Cudi––satisfying an all-time career goal for director Cole Bennett.

Dot da Genius has been the mastermind behind some of hip-hop’s most transformative moments of late, and now with the help of his long-time collaborator Kid Cudi, Denzel Curry, JID & Cole Bennett––he’s ready to show the world his own distinct creative vision.

“I’ve been in music for a long time, right now I’m understanding what phase and era I’m entering. It feels good to finally make the decisions, decide what looks good, and just get my vision out to the people that supported me all this time. There are so many kids out there that have supported me, so I want to give them something to hold on to.” – Dot da Genius

Dot da Genius is fresh off executive producing the third chapter of Kid Cudi’s coveted Man on The Moon series released in 2020 and scoring the soundtrack to Cudi’s upcoming animated Netflix series Entergalactic premiering in September. “Talk About Me” has been in the works since early 2019 when Denzel Curry & Dot met for the first time in a recording session at Dot’s studio, The Brewery Recording Company. Denzel and Dot’s creative relationship continued, with Dot producing a pair of tracks on Denzel’s 2022 album Melt My Eyez See Your Future. In 2020, Dot was playing records for Cudi in his studio and after hearing “Talk About Me”, Cudi was enthralled by the track and immediately decided to add a verse to it. Dot wanted to add an additional rapper on the track and sought to have an all-star lyricist on “Talk About Me”, so JID was a natural choice for him. Denzel Curry personally looped in Cole Bennett to head the video for the track––with Lyrical Lemonade adding the experimental and vibrant visuals to pair with the star-studded collaboration.

Remember the name….Michael Star. The rising reggae artist, known for his sultry smooth vocals, continues to captivate audiences with his innate musical gift. On the heels of his widely successful single, “Tun Up,” Michael Star is back with the release of his highly anticipated second single, “7 o’clock” featuring reggae icon, Bounty Killer. END_OF_DOCUMENT_TOKEN_TO_BE_REPLACED

Fast Rising Kumasi based Artiste, Kobby Carter has once again hit Ghanaians with another banger dubbed ‘Money’ which promises to be a timeless banger. END_OF_DOCUMENT_TOKEN_TO_BE_REPLACED

Following the success of 2021’s ‘Moye’, dESH.DUBS has released yet another single off his forthcoming album today. Titled ‘DUBSTAR’, the new song is a combative Drill song with Afro-Reggae stylings to it, accompanied by calming guitar melodies, heavy basslines, and war-like lyrics which were seemingly inspired by the Drill music scene in Africa and the UK. END_OF_DOCUMENT_TOKEN_TO_BE_REPLACED

Today, internationally acclaimed, multiple-award winning British musician YUNGBLUD has released his latest single titled ‘The Emperor,’ out everywhere today. This triumphant and fierce new track comes with news that it is has been selected as the official 2022 anthem for ESPN’s College Football Season. END_OF_DOCUMENT_TOKEN_TO_BE_REPLACED