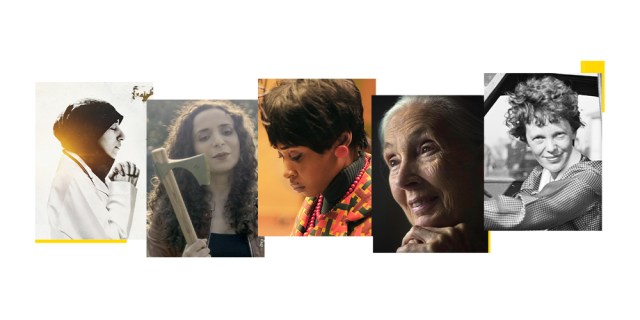 National Geographic celebrates Women of impact this March. They live among primates in the jungle, dive the oceans for clues to the health of our planet, uncover our human origins in African caves and test new technologies in outer space. They break glass ceilings in newsrooms, boardrooms, courtrooms and classrooms. National Geographic’s brand initiative for 2020, Women of Impact, will showcase history-making and boundary-breaking women whose stories create a stunning portrait of their past, present and future impact on our world.

Oscar® -nominated documentary feature The Cave will premiere on National Geographic channel (DSTV 181) on Sunday 8 March at 7pm, on International Women’s Day, marking the start of the channel’s Women of Impact celebration. The Cave unveils the harrowing true story of an underground hospital in war-torn Syria and the inspirational female doctor running it. Thereafter, each Sunday night until South African Women’s Day (9 August 2020), will play host to more stories of remarkable, diverse, brave and heroic women, from Jane Goodall, to Diana, Princess of Wales, Amelia Earhart and many more.

This stunt will culminate in the third instalment of National Geographic’s Emmy award-winning anthology series, Genius, which will showcase the legendary Aretha Franklin. Oscar® -nominated Cynthia Erivo will play the lead role in the first-ever, definitive scripted limited series on the life of the universally acclaimed queen of soul, in Genius: Aretha.

“The Cave’s 2020 Oscar® nomination for best Documentary Feature is an exciting moment for us, as it further shines a light on the remarkable work done by Dr Amani in war-torn Syria. I could think of no better way to start our Women of Impact campaign, that showcases so many prolific women across the globe.” said Evert van der Veer, Vice President, Media Networks, The Walt Disney Company Africa.

From Oscar-nominated director Feras Fayyad (“Last Men in Aleppo”) comes The Cave, a stirring portrait of courage, resilience and female solidarity. For besieged civilians in war-torn Syria, hope and safety lie underground inside the subterranean hospital known as the Cave, where paediatrician and managing physician Dr Amani Ballour and her colleagues Samaher and Dr Alaa have claimed their right to work as equals alongside their male counterparts, doing their jobs in a way that would be unthinkable in the oppressively patriarchal culture that exists above

It all starts with one question: How will you make the world a better place? From household names to rising stars, meet the women who are changing our world. The groundbreaking documentary Women of Impact features interviews with more than 40 boundary-breaking, history-making women including Sylvia Earle, Melinda Gates, Rae Wynn-Grant, Gladys Kalema-Zikusoka, Jane Goodall, Dian Vossey, Jacinda Ardern and Beverly Joubert.

This short film is difficult to look at. Yet we are asking you to go on the remarkable journey of how a young woman received a face transplant because it reveals something profound about our humanity. Katie Stubblefield lost her face when she was 18. When she was 21, doctors at the Cleveland Clinic in Ohio gave her a new one.

Diana: In her own words

In 1991, inside London’s Kensington Palace, Diana, Princess of Wales, participated in a series of secret interviews, recorded with her permission by a close friend on behalf of journalist Andrew Morton. Morton was writing a book about Diana’s life to reveal what life was really like for the most photographed woman in the world. The public was unaware that Diana, Princess of Wales’, marriage to HRH Prince of Wales was at a crisis point. Now, National Geographic Documentary Films reveals Diana’s thoughts and feelings at a very specific point in her life, presenting one side of a very complicated story, her side. Entirely in her voice, with no interviews, most of these unique recordings have never been broadcast before.

Tarini is the story of 6 young women in one small sailboat out to conquer three oceans on their bid to circumnavigate the world. It’s a trip of a lifetime. The girls will be out at sea for over 200 days before they return home and touch land just 4 times. That was the plan. But the oceans and the winds had other plans for the young naval women. The film spans their journey around the world, the challenges faced and celebrates the spirit of these 6 brave women.

The next chapter of Dr Jane Goodall’s life’s work unfolds in Jane Goodall: The Hope. The two-hour documentary special will take viewers through chapters of Dr Goodall’s journey in the 60 sixty years since her groundbreaking discoveries in Gombe researching wild chimpanzees, including her activism, creation of her non-profit organization, the Jane Goodall Institute (JGI) and Roots & Shoots youth program, along with her current efforts to inspire the next generation.

Viking Warrior Women explores new discoveries that challenge everything we thought we knew and showcases how cutting-edge science and technology have revealed evidence that elite viking warrior women lived and fought more than a thousand years ago.

Expedition Amelia follows National Geographic explorer Bob Ballard’s quest to solve one of the most enduring mysteries of all time the loss of another famed explorer, Amelia Earhart. Along the way, it also tells the extraordinary and often overlooked story of Amelia herself a record breaker and tireless advocate for women’s rights, a hundred years ahead of her time.

Premieres with a double bill of episodes 1 and 2 on Sunday 14 June at 6pm, thereafter one episode per week, on Sundays at 7pm until Sunday 9 August.

Oscar nominee, Cynthia Erivo will star as Aretha Franklin in the next instalment of the Emmy-winning global anthology series Genius: Aretha. This upcoming season will be the first-ever, definitive and only authorised scripted limited series on the life of the universally acclaimed Queen of Soul. Genius dramatises the fascinating stories of the world’s most brilliant innovators, exploring their extraordinary achievements along with their volatile, passionate and complex personal relationships. The third season of the anthology series will explore Franklin’s musical genius and incomparable career, as well as the immeasurable impact and lasting influence she has had on music and culture around the world.

Related Topics:National Geographic
Up Next

On Tuesday, August 2, Netflix hosted a “See What’s Next Africa” content showcase in Lagos, Nigeria, to spotlight its increased investment in Africa’s rich storytelling history through exciting new projects in a wide range of genres and formats that will be available in 190 countries. END_OF_DOCUMENT_TOKEN_TO_BE_REPLACED

Religious fanaticism and extremism have plunged countries into chaos and conflict the world over. Countries in West Africa that have been affected include Nigeria, Burkina Faso and Mali among others. END_OF_DOCUMENT_TOKEN_TO_BE_REPLACED

The meteoric rise of the African entertainment industry into a reckoning force within the global entertainment landscape has been accentuated by MTV Base’s tireless commitment to expanding the acceptance of African music, lifestyle, and entertainment across the globe. Over the last two decades, and in recent times, it has affirmed this commitment with various innovative campaigns, the most recent of which is its Musicology series.   END_OF_DOCUMENT_TOKEN_TO_BE_REPLACED