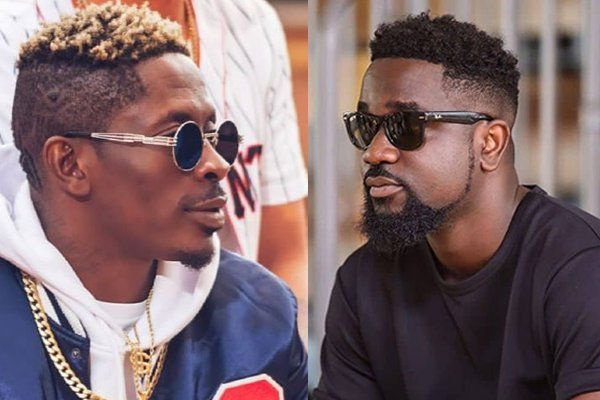 Award-winning rapper, Sarkodie has revealed that contrary to what is portrayed on social media by his colleague Shatta Wale, the two share a very good relationship.

Over the past years, Sarkodie  has been on the receiving end anytime Shatta Wale goes on his social media spree to call out his colleagues in the industry.

Just recently, Sark was named and insulted during one of Shatta Wale’s live shows without any provocation.

Reacting to the daily attacks from Shatta Waled during an appearance on the  ‘Podcast and Chill with MACG’ in South Africa, Sarkodie stated that he has lost count.

“I have even lost count because my brother Shatta Wale is crazy. He just wakes up and something will happen. I have lost count of what exactly happened, he has done a lot,” he stated.

He also explained that although Shatta Wale attacks him for know reason, his  “shenanigans” brought some energy to the industry,

“That is somebody that brought energy into our industry as much as we were mad. He insults me for no reason, we will be on the phone today and tomorrow he is up on the radio saying ‘F’ Sark. Sometimes, you don’t understand it but I think for a moment he brought energy and attention to the industry,” he added.

Bose Ogulu has told her son Burna Boy to “tone down the madness” as she celebrated his birthday. END_OF_DOCUMENT_TOKEN_TO_BE_REPLACED

The Hewale Lala (Song Of strength) hit maker Perez Musik gets ready to have his first-ever major concert. END_OF_DOCUMENT_TOKEN_TO_BE_REPLACED

Kofi Sonny, CEO of 610Music, a direct representative for Universal Music Group in Africa, unveiled two of his newly signed artistes to the world over the weekend. The event pulled in dignitaries from all over the globe to witness what many have dubbed “the birth of greatness.” END_OF_DOCUMENT_TOKEN_TO_BE_REPLACED

GuiltyBeatz is ringing in the summer! The Grammy-nominated Ghanaian producer and DJ is back with another dazzling solo effort – an Amapiano-infused dance anthem ‘Universe’ featuring Pop sensation, Mr Hudson and buzzing Ghanaian singer, Twitch 4EVA. END_OF_DOCUMENT_TOKEN_TO_BE_REPLACED