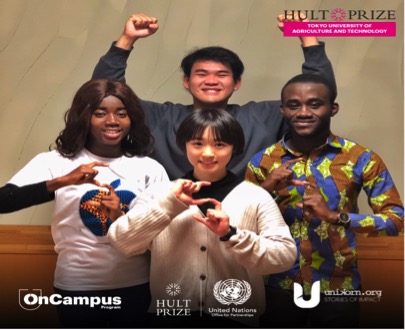 Two exchange students from University of Ghana together with two students from Japan and Laos, have successfully proceeded to the Hult Prize Regionals Summit in Kuala Lumpur, Malaysia .

This came after Team Stercus, the group’s name, emerged as one of the top three teams out of twenty teams after a successful on- campus session in Tokyo University of Agriculture and Technology (TUAT) in Japan where the students are currently undertaking a one year exchange program.

The team represented by Ms. Esther Afi Dzigbordi Tamakloe (Team Leader) (Ghana), Mr. Prince Boateng Amoah (Ghana), Mr. Souliya Thidphaxay (Laos) and Ms. Ruka Masano (Japan) stands a chance to proceed to the Hult Prize Accelerator in Boston, US and a final pitch for a million dollar prize at the United Nations in San Francisco, New York after the Regionals Summit in Malaysia.

Hult Prize is a competition which allows students from around the world an opportunity to showcase their innovative ideas, learn from their peers and be inspired by a generation of young people who are committed to changing the world through business. With the theme for this year’s Hult Prize competition ‘Building start-ups that have positive impact with every dollar earned’ the students decided to come up with Stercus, a start-up which aims at revolutionizing organic crop production and make organic cropping easier with locally available materials and technology in Ghana.

Speaking with the team, the team leader, Esther Tamakloe, first expressed happiness to be part of this feat . She revealed that ‘the journey to impact the world as young people has just began and we are not doing this for ourselves but for our countries and the world at large’ . Continuing she expressed that it is the team’s belief that with this business idea they can make a great impact on the environment and crop production and feed millions in Ghana and all over the world.

Finally the team expressed their gratitude to their campus director, Kesevan Veloo and other mentors for their selfless devotion and dedication towards helping the group.

Currently, Team Stercus is working hard towards doing their prototype and testing it in Ghana in Ghana ahead of the Regionals Summit which is scheduled for March this year.