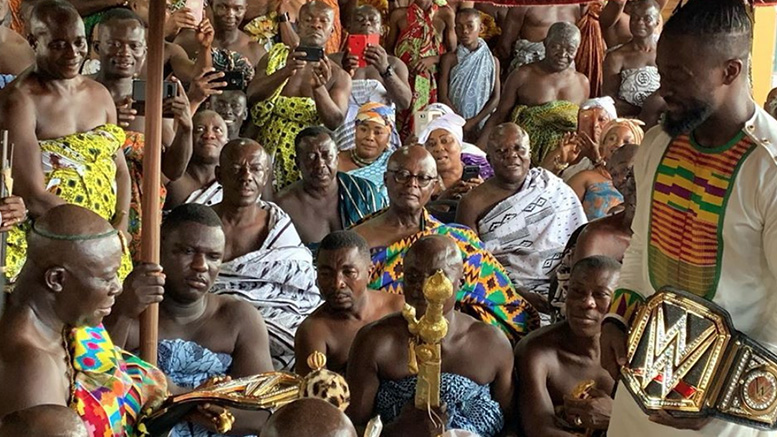 WWE SUperstar, Kofi Nahaje Sarkodie-Mensah whom we all know as Kofi Kingston is visiting Ghana, the place of his birth for the first time in 26 years.
and He’s not just here for a visit, his 4-day promotional trip is being filmed for a future WWE Network documentary.

Kofi arrived in Accra on Thursday May 30th to a warm welcome from fans and members of the government’s 2019 Year of Return Steering Committee. His first task on arrival was a press meet and greet at multichoice Ghana. his visit was put together by his family and Dstv supersport so it was only right that the press conference was held at their premises.

At the press meet and greet, Kofi highlighted the importance of finally achieving the dream he had envisaged since his WWE debut in 2008.

“i feel that if I had won the title back then, it would not have been meaningful as it is now. everything happens for a reason and a lot of stars had to align for that. i had to wait 11 years to become WWE champion, Kofi told the press.

On Friday, May 31st, a very packed day for the champ, he first paid a courtesy call on the President of Ghana H.E Nana Akufo-Addo at the Jubilee House to present his world title belt to the presidency. According to him, he considers this “Year of Return” as a unique opportunity for him to make a historic visit to Ghana at the height of his wrestling career.

During the day, Kofi in partnership with UNICEF Ghana, spent sometime with kids from Taifa Community School to reemphasize the importance of education while hopefully inspiring them to follow their dreams.
Later in the evening, Kofi was invited to join the Black Stars for their Farewell Dinner at the Kempinski hotel as they prepare to depart from the country for Dubai to fine-tune their preparations for the 2019 AFCON.
On Sunday, June 3rd, Kofi had the honor to visit asantehene Otumfour Osei Tutu II. He was warmly welcomed with a cultural display. He also presented his title to the Asantehene.

Kofi later on proceeded to Ejisu, his father’s home town where he visited his grandparents house. Kofi later met the Chief of the Ejisu Traditional Area, Nana Afrane Okese IV and he described the experience as “a powerful day of connecting with his heritage!”.

Actor-turned-musician, Frank Naro’s latest single, “I Like It” sees him experimenting with the trending ‘Amapiano’ music phenomenon. END_OF_DOCUMENT_TOKEN_TO_BE_REPLACED

Mista Myles is in with his first release of the year today, ‘Toxic Love’ – a song about what would easily pass as an intense night in the Sin City, Vegas. Stream or download ‘Toxic Love’ across all major digital platforms here: https://ffm.to/6vr4ra9 END_OF_DOCUMENT_TOKEN_TO_BE_REPLACED