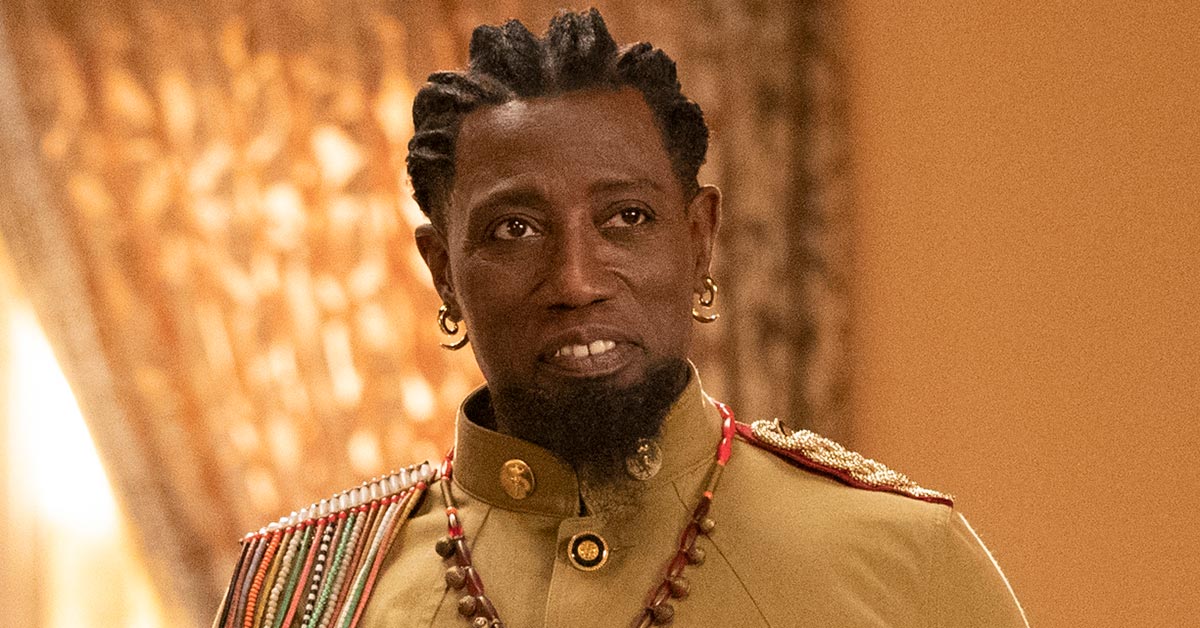 Movie fans may know Wesley Snipes for bringing drama and action to the big screen, but in the anticipated upcoming ‘Coming 2 America’, we see him put on his funny hat, alongside an ensemble cast of comedians.

Snipes plays the role of General Izzi, the fearless leader of Nexdoria, which he describes as the most important role in the movie in an interview with me. “Well, I think it is the most important role in the movie. For the benefit and survival of Zamunda, they have to do General Izzi right, they can do it the hard way or the Izzi way, it is up to them.”

Tensions between Nexdoria and Zamunda were sparked over three decades ago, when Prince Akeem (Eddie Murphy) left General Izzi’s sister, Imani, at the altar and jetted off to America to find his true love. Since that time, there has been mayhem, with the General becoming laser-focused on uniting the dynasties through marriage somehow, someway or else.

Being a part of ‘Coming 2 America’ is an experience the actor has looked forward to for a long time after he had an unsuccessful audition some thirty years ago for ‘Coming To America’. Snipes auditioned for the character of Daryell, which eventually went to Eriq La Salle.

He explained why he just had to be a part of this sequel: “The costumes, the wonderful production value reminded me of the films of the twenties and thirties in the golden age of cinemas. The idea of seeing all that in an African context was what is was all about.”

Snipes executed his role as the General with all dedication, very determined to make it as representative and believable as possible.  “There are different dialects and intonations among the many countries in Africa, so over the last few years, I have been slowly practicing, slowly building up to be able to articulate the variations from Nigeria to South Africa, Ethiopia and Liberia. To be able to master all of the different languages of our culture, that is the diversity of our diaspora, so I can act in them. That is the goal; to be able to act with the great actors coming from the diaspora and the motherland. In the native tongue is the way to go.”

He also wants viewers to understand that it is good to still have dreams and fantasies as they enjoy the movie, available from March 5 on Amazon Prime Video. “Family can be the most healing institution or medicine that you can take. When you are connected and supported by your family that is your wealth and health. “

‘Coming 2 America’ was filmed in Atlanta, Georgia, on the Tyler Perry Studio sound stages beginning in August 2019.  For Snipes, it would be great to build a studio in Africa so that black cinema would not only have Tyler Perry Studios.

He hinted that Africa would soon experience some interesting things from him not only in film but also in technology. “We are doing some wonderful partnerships with NASA, and scientist from the motherland, looking at AI, virtual reality, and robotics; and artificial institutes of excellence, incubators that cultivate these young people with skills for the frontier technologies that are here.”

There is also some good news for African films. “We have something coming and we are not just talking about a film. We are talking about the infrastructure to support film manufacturing at multiple levels, and also those who can be innovators in the technology around film and television manufacturing.”

Snipes also hinted of a Neuro-linguistic systematic translational technology that would allow  the various tribes of Africa to communicate with each other and watch movies at the same time.

Related Topics:featuredWesley Snipes
Up Next

Craig Brewer, director of ‘Coming 2  America’ highlights how important it was to get the African elements right