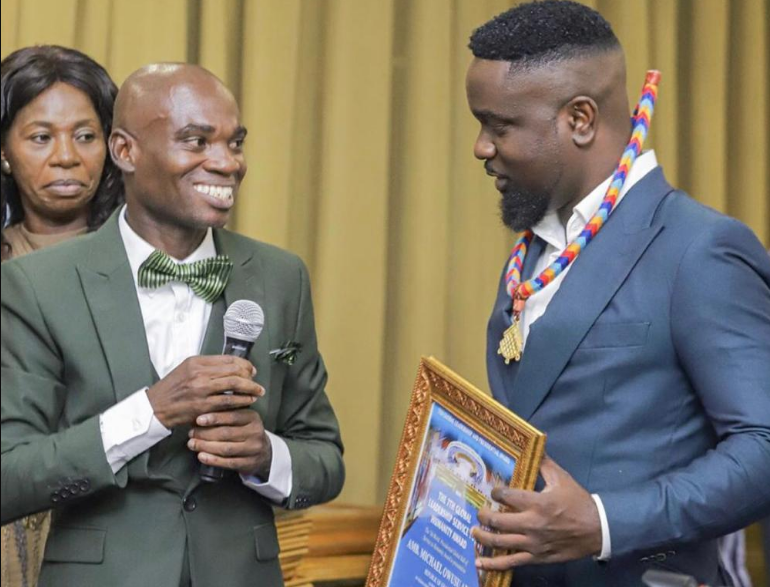 Celebrated Ghanaian rapper, Sarkodie has broken his silence on the “fake” United Nations Awards that were handed to him and other personalities in Ghana back in August, 2020.

Sarkodie was part of a group of notable people in Ghana, including politicians, media personalities, academics, celebrities and others who fell for the fake UN award scam organised by one Dr. Kwame Owusu Fordjour, popularly known as Dr. UN, at Alisa Hotel in Accra on Friday, August 28, 2021.

In a recent interview on Pure FM during his Kumasi invasion, Sarkodie explained that when he got to the venue, things were a little off.

“Angelo (Sarkodie’s manager) told me we had to be somewhere and when he asks me to move, I move. When we got to the venue, things were off a little, but I saw people there so I stayed. When I saw Dr UN at the back in his suit, I didn’t think he was the one organizing the award. But then later I heard him speaking on stage and I was like oh he’s the one in charge,” he told the interviewer.

Sarkodie added that he feels anyone could have fallen victim;

“I think it can happen to anyone. The way it was presented, you can take it for what it is.”

Although the award scheme turned out to be fake, the “Coachella” hitmaker stated that he still holds the award in high regard because he doesn’t think Dr UN was wrong in deciding to honour people on his own.

“But later on I was thinking if it was directly from the UN and the UN wants to honor you, but if it’s his own award I don’t think it’s still wrong. I think I still have to hold on to this award. It’s still worth it. He felt he should award people. But he used the name (UN) to lie to us,” he added.

The Adentan Circuit Court on Tuesday, 18 January 2022, issued a warrant for the arrest of Deputy Minister of Tourism, Arts and Culture Mark Okraku Mantey. END_OF_DOCUMENT_TOKEN_TO_BE_REPLACED

KiDi’s global hit “TOUCH IT” which went viral on social media has been nominated for ‘Outstanding International Song’ at the 53rd National Association for the Advancement of Colored People (NACCP) Image Awards. END_OF_DOCUMENT_TOKEN_TO_BE_REPLACED

Actress Adowa Pee who is famed for her role in the popular Sunday Cantata drama on GTV has been hit with a health condition she is struggling to manage and has publicly called for help. END_OF_DOCUMENT_TOKEN_TO_BE_REPLACED

One of Ghana’s most celebrated food vloggers watched and loved worldwide, Sweet Adjeley has disclosed the question most of her Ghanaian audience wants answers to. END_OF_DOCUMENT_TOKEN_TO_BE_REPLACED