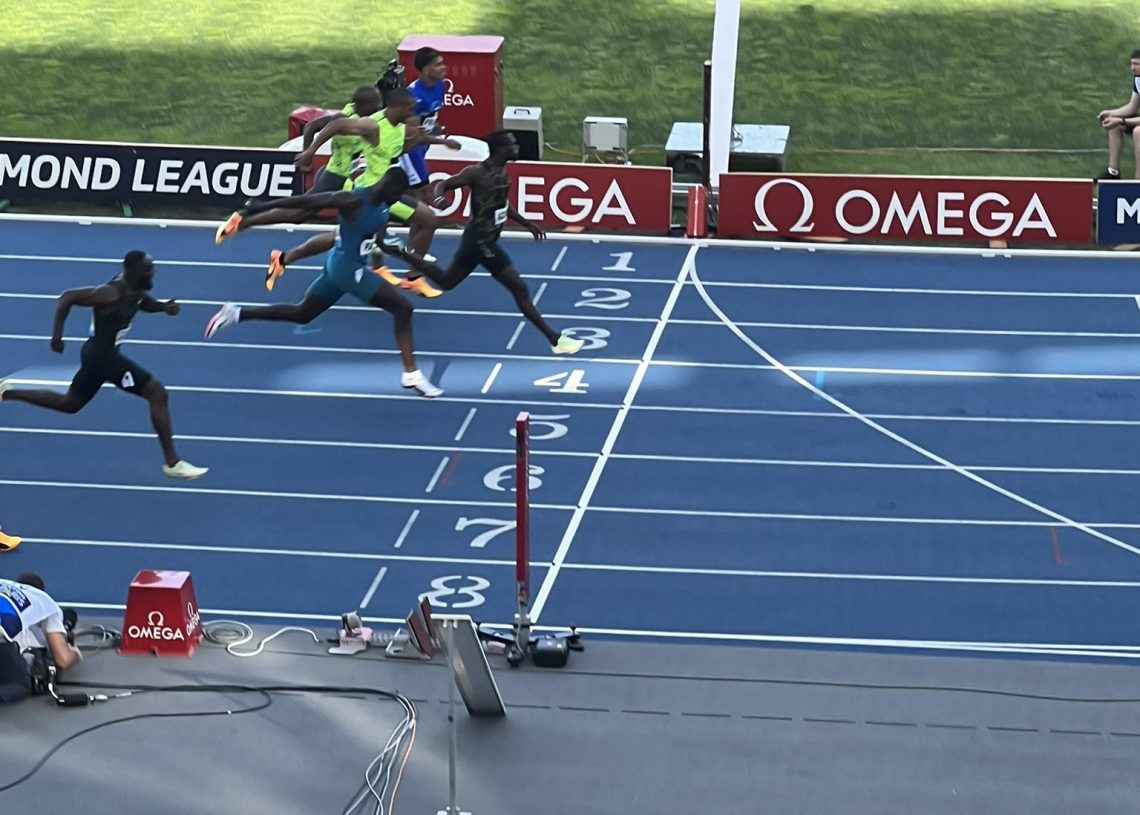 Azamati ran a time of 10.25s, finishing the race ahead of Mouhamadou Fall and Jimmy Vicaut, both from France.

Fellow Ghanaian sprinter, Sean Safo-Antwi, however, finished sixth with a time of 10.45s.

Azamati’s winning time was slower than his time in his last race in Oslo, where he ran 10.15s to finish fourth.

He will also compete in the 200m race, where he will come up against reigning Olympic champion, Andre de Grasse.

Azamati was born on 14 January 1998 to John and Faustina Azamati in Akim oda, Ghana. His preferred sport growing up was football but transitioned to athletics while attending Presbyterian boys senior high school in Accra where his running talent was discovered by his PE masters (Nathaniel Botchway, Gideon Appah, and Mr. Kofi Dadzie).

As a 22-year old he emerged as an Olympic hopeful for Ghana in the sprints after running 100 metres in 10.02 seconds HT at the 2019 Ghana’s Fastest Human competition.

He won the gold medal at the 2019 African Games in Rabat. He won the GUSA 100m on two occasions. Sprinter Benjamin Azamati, broke Leo Myles-Mills’ long standing Ghana national record in the 100m and booked a place at this year’s Olympic Games in Tokyo with a smashing 9.97s (1.5m/s) run in Heat 8 of the Texas Relays on Friday afternoon.

There was pressure to release a song bigger than Forever-Gyakie

Bose Ogulu has told her son Burna Boy to “tone down the madness” as she celebrated his birthday. END_OF_DOCUMENT_TOKEN_TO_BE_REPLACED

The Hewale Lala (Song Of strength) hit maker Perez Musik gets ready to have his first-ever major concert. END_OF_DOCUMENT_TOKEN_TO_BE_REPLACED

Kofi Sonny, CEO of 610Music, a direct representative for Universal Music Group in Africa, unveiled two of his newly signed artistes to the world over the weekend. The event pulled in dignitaries from all over the globe to witness what many have dubbed “the birth of greatness.” END_OF_DOCUMENT_TOKEN_TO_BE_REPLACED

GuiltyBeatz is ringing in the summer! The Grammy-nominated Ghanaian producer and DJ is back with another dazzling solo effort – an Amapiano-infused dance anthem ‘Universe’ featuring Pop sensation, Mr Hudson and buzzing Ghanaian singer, Twitch 4EVA. END_OF_DOCUMENT_TOKEN_TO_BE_REPLACED

The host of Joy FM’s Strong and Sassy, Animwaa Anim-Addo, has tied the knot in a private ceremony. END_OF_DOCUMENT_TOKEN_TO_BE_REPLACED